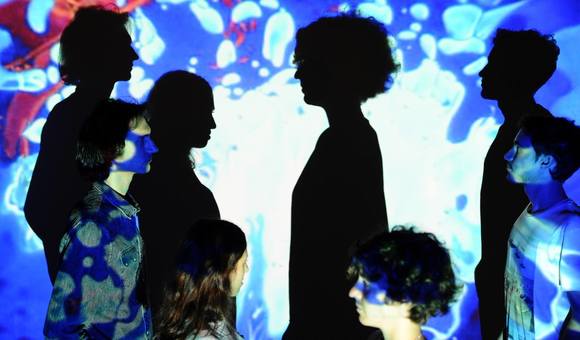 Since the debut, their signature wall-of-sound has inspired rave reviews, with single “Catching a buzz” spinned on BBC6 (Steve Lamacq, Radcliffe and Maconie) and sophomore album 'Des fleurs magiques bourdonnaient' praised by influential webzines like Drowned in Sound, Clash Music, Sounds better with reverb.
Their live set at Manchester's Cosmosis Festival, headlined by The Jesus and Mary Chain, Brian Jonestown Massacre, The Raveonettes and WIRE, kick-started a 44-date tour touching UK, France, Belgium, Austria, Switzerland and Italy, during which the quartet shared the stage with The Telescopes, Ringo Deathstarr and Gonjasufi. In Italy, the band was ranked among the best live shows by 200 Italian promoters of the KeepOn Live indie network.
The new album Kykeon, produced by James Aparicio (Spiritualized, Cult Of Dom Keller, Dead Vibrations), has been released in September 2019 on cult indie psych label Fuzz Club.
Their set at SXSW 2019 impressed, among others, Bob Boilen of All Songs Considered and earned them a feature on NPR's festival wrap-up as well as airplay on the network's radios.
The band has recently performed at Eurosonic 2020, where they have been recommended by Clash Music among the "five new bands to watch out for".

'Their set was tectonic and hypnotic at the same time. Italy loves their phantasmagorical doom bands, and Rev Rev Rev fit the quintessential bill and then some'
[Drowned in Sound]