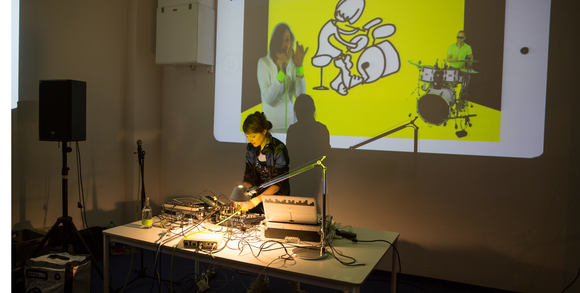 "We've got ideas in our heads, more than we can carry."   The Concert on the Virtual Stage What do you do as musician being a newcomer to Berlin?

Rahel Kraska builds her own stage -- by drawing it with a pen!
In her home studio, she performs her Debut Album "Soundtrack fürs Leben": She films herself singing and playing, recording the sound at the same time und setting up all lighting. Drummer Tomi she records in a studio, too.

But who is playing the instruments that are missing?
She simply teaches her self-drawn "Rahel Comic Girl" and puts her on stage.

How is this possible?
Using 2 cameras, 2 remote controls, a greenscreen, recording software and the spirit of learning by doing.

This is it!
After having turned the studio into a sauna with 6 construction lights, crashing hard drives, building moving stages on the computer, drawing comics, recording drums for a weekend and after 14 days of singing, time has come:

The 90-minutes Concert of Rahel Kraska could be released on DVD:
Her performance of 17 songs on her self-drawn stage, along with Drummer Tomi and Rahel Comic Girl!