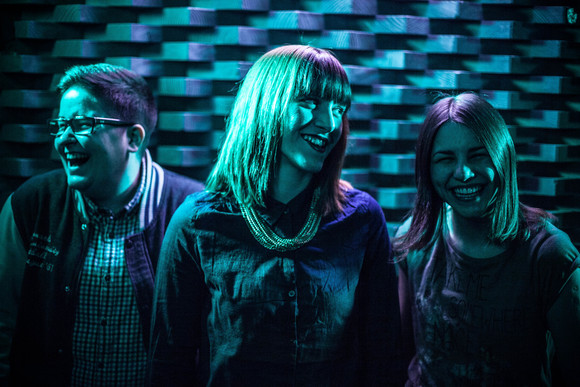 Puncke are probably the best young rock band that came from Croatia in the last 10 years!

Although they just reached another peak in their career supporting Queens of the Stone Age in Ljubljana and Zagreb in June 2014, Lucija (guitar and vocals), Ruby (drums) and Anja (bass guitar) are continuing to push things forward. Formed in Vinkovci, Croatia back in 2007 Puncke started as a multimembered high school collective but from 2011 they are a strong three piece band that still hasn't decided which genre they belong to. The audience and media usually describes Puncke as an alternative/indie or punk rock band but all kinds of music influences and their personal music favorites made every one of their songs different from the others. You can hear that on band's debut album "Suncano s povremenom naoblakom" that was released at the end of 2013 and immediately became praised by the audience as well as the critics. The album was included in each and every "Best Album of the Year" list in magazines and music portals in Croatia and region. Untill now, Puncke played over 200 live shows in Croatia, Serbia, Slovenia, Austria and more, playing festivals like InMusic and Terraneo and opening for Queens of the Stone Age as mentioned before. Their explosive, loud and emotional performance is well known to anyone who has been to their shows so check them out during their 2014 summer tour, from Exit and SuperUho festivals to beautiful Park Orsula in Dubrovnik.

Croatian band from Vinkovci and Novska, currently based in Zagreb, consisted of three girls - Lucija (guitar, vocals), Ruby (drums) and Anja (bass guitar). The band was formed in 2007 and until now they have changed their members which made their music stronger and better than before. Although they still haven't decided which genre they belong to, because each song is unique and has different influences, the audience describes them as alternative/indie-rock band with a dose of Television, Patti Smith, Sonic Youth, Blood Red Shoes, White Stripes and others. Their debut album "Sunčano s povremenom naoblakom" was released at the end of 2013 to rave reviews in the ex European region, coming up at no1 on most of the year end charts. Their performances count up to over 200 now, most significant being Jelen Demofest, INmusic Festival and Terraneo Festival, and also confirmed for Exit festival this summer and numerous other events in the region.