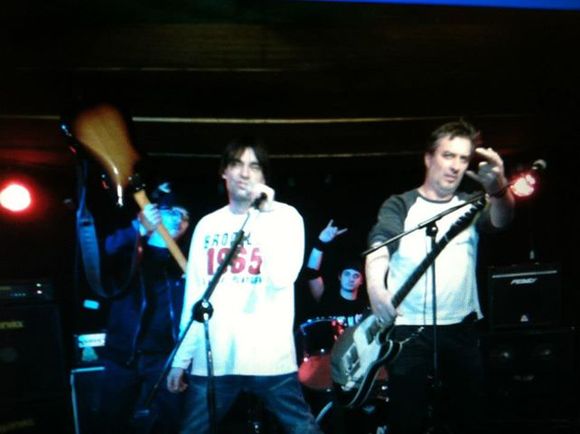 PUKE N GRIN ,hailed as one of the most thought provoking acts of the beginning decade, are a bunch of guys playing their dirty mixture of hardrock and punk, with just a tablespoon of british steel seasoned with little bits of some other rather secret ingredients.

(Journalists, go ahead and invent yourselves a tag)

Founded in 1948 by TODD SHOCK (voc,git) (then known as Charlene Sheck) , they soon bounded together to form the four-piece we all know today.

VINCENT RAGE , an original Melbournian Punkrock kid delivers killer guitar tones (and vocals) all the time, as long as he´s still there...

PAIN SHORTER usually doesn´t want to talk about his past as resident composer and master bassplayer of the Syracuse Sitcom Symphony.Today he feels he is right where he
belongs : at the heart of the deep and dirty grooves of PUKE N GRIN !

LASSE REINBÖNG was one of the original founders of Danish Death & Doom drumming
and inspired triads of devotees.After he left touring the world with „Disciples of Thünder“
PUKE N GRIN recruted LORD LOVE as the new skinbeater extraordinaire.

PUKE N GRIN live to play live and are usually looking for opportunities to bash it out.
Nevertheless, they even released their critically acclaimed debut album PUKE N GRIN und just followed it up with a Live-EP called ALIVE II !