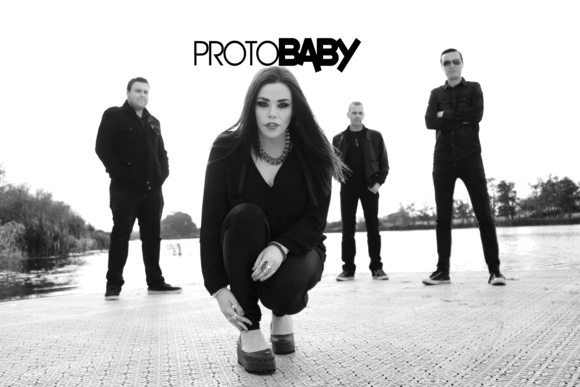 The single was the first new release since the bands well received debut album 'The Spark'. It was also the first release to feature new front woman Aoife Mcloughlin (the Voice Of Ireland). Formally an all male lineup, the single will signal an exciting new era for Protobaby. The single was recorded by legendary producers Chris O Brien and Graham Murphy of The Production Suite Dublin who very recently worked on 2 top 10 hits by The Stunning and Samantha Mumba and have produced a whole host of top acts.

2013 was a great year for Irish band Protobaby with 2013 Tour dates to date taking in the Netherlands, UK and Ireland!

Protobaby had a very busy and exciting 2012 building a strong fanbase both nationally and internationally.March saw the release of their debut album ‘The Spark’. Protobaby teamed up with Owen Lewis who has previously worked with REM, Hole and Snow Patrol just to mention a few to record their full length debut, with the end result receiving a massive thumbs up from critics and fans alike. The album was mixed with additional production by Chris O’Brien and Graham Murphy at The Production Suite, Dublin. (The Stunning, Gemma Hayes, Human League, Clannad, The Waterboy's, Whipping Boy, A House...)

They returned to Poland in May to play at the huge Polish 3 day festival Juwenalia Bialystok 2012 playing to 10000+ people, having played at same festival in 2011 with huge German band Guano Apes.

Singles from the album received and continue to receive lots of national and regional airplay. Singles and videos to date from 'The Spark' include: 'State Of Affairs', 'Traditions', 'Fluorescent and 'Only A Spark'.' 'Fluorescent' was named as Today FM’s daily download on Tony Fenton’s very popular national show along with the band also recording a session for the Paul Mcloone show on Today FM and doing an interview on 2fm with Dave Fanning.

The controversiall video to 'Traditions' was banned by Youtube in late 2011 and the video to 'Only A Spark' captured the bands energetic performance at Juwenalia Bialystok 2012.

2012 was spent touring both nationally and internationally including dates in Ireland, UK and Poland. A successful tour with the the Frank and Walters on their 25th Anniversary tour for 'Trains, Boats and Planes' including dates in the UK and Ireland as well as support slots with bands such as Delorentos and Jape.

In November Protobaby appeared on a regional cover of Hot Press and had a full interview in the national edition of Irelands most popular music magazine.

'Recent addition Aoife McLoughlin captivated the packed venue with her gorgeous vocals. A first glimpse for many of the new line-up, on this display Protobaby are about to hit another level'
Hot Press Magazine Live review (Dec 2013)

‘If this single is anything to go by then the album will be stunning. Roll on next year!’
Traditions Single Review (Boost The Music)

‘A very solid single release from a band that are clearly the best thing to happen to Limerick music in a long time. Keep your eye & ears on these guys folks, Protobaby are going to be big’
State Of Affairs – Single Review (Rarities, B-Sides & Other Stuff)