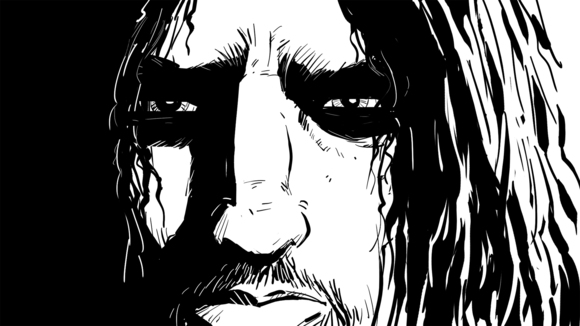 Brian Hogan is a son of a preacher man.

During his childhood his father Larry Hogan spent his life singing and preaching the message of the Gospel but wouldn't let Brian listen to AC/DC. So instead Brian started listening to Black Sabbath, Jimi Hendrix, Led Zeppelin, Bowie, Neil Young and grew his hair long. He was handed a bass at the age of 12, got drafted into his dad's Christian band and spent summers touring Europe. The seed was sown and a minstrel's life it was to be, intertwined with sojourns of animation and illustration (credits include the original Teenage Mutant Ninja Turtles).

Since then with various bands notable musical highlights of his career include playing Glastonbury, Reading, Cambridge Folk Festival, the Electric Picnic (Ireland), Womad Festivals worldwide and the Montreaux Jazz Festival. In 2008 Brian with Kila, highly regarded as Ireland’s most innovative contemporary folk and new world artists, shared a number-one-hit alongside U2 and The Dubliners (The Ballad Of Ronnie Drew) and in 2010 an Oscar nomination for animated feature ‘The Secret of Kells’. To date Brian has enjoyed playing with many talented artists including George Hamilton IV, Bono, U2, Ronnie Wood, Sinéad O Connor, Gavin Friday, The Dubliners, Paul Brady, Donal Lunny, Liam O Maonlaoí and Glenn Hansard.

Preachers Son has seen Brian collaborate with a wonderful array of musical guests, but 2014 now sees the emergence of a Preachers Son Holy Trinity with Brian joined full time with drummer Geoff French (The Brilliant Things) and guitarist Mark Walsh (The Cold 100).

"When I heard Preachers Son I thought they were something special. I put them in the studio with my friend Warren Huart. I thought it would be a good pairing. It turned out to be a great one. I am happy to have played some small part in the creation of this wonderful music.” JACK DOUGLAS

"Recording Preacher’s Son was an amazing experience for me as they are are an honest raw sounding passionate band, spearheaded by vocalist and lyricist Brian Hogan. You can feel the blood, sweat and tears pouring through these tracks, no pretentions here just Rock & Roll the way it’s supposed to be played!" WARREN HUART

2015 Preachers Son are set to work with Manfred Schütz formerly of SPV has taken us on with M.I.G. alongside Ronald Draijer / Suburban as partners, licensing album 10 Stories Tall in Germany, Austria, Switzerland and Benelux.