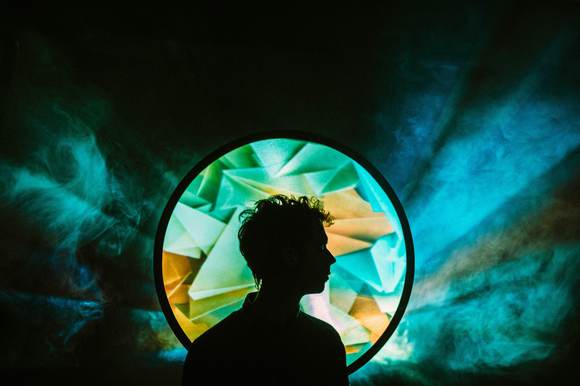 
Having performed solo till now, Pomrad will be playing live as a trio in 2014. The new live show can be seen as a modern hiphop/funkband indebted to acts from the 70’s and 80’s. References are the jazzfunk of Herbie Hancock’s Headhunters, the electro-funk of Zapp & Roger and George Duke and the electric jazzfusion of Yellowjackets and Level 42. But Pomrad brings to this the heavier, bass filled sound of current electronic music from Hudson Mohawke to Daft Punk.

The elements of his solo set: midi controlled samples & synths, talbkox and keytar are augmented with electric and midi guitar, drumpads and acoustic drums, and more synths. In this way making possible to translate the produced Pomrad sound to a live setting, while retaining the flow, interaction and groove which can only still be created by live musicians.

With his first release, the infectious and soulful sounds off Pomrad’s Vlotjes EP were taken by Belgian press to be a revelation and invited comparison to the likes of Hudson Mohawke and Rustie. Connecting the dots, Pomrad approaches these recent influences through his own eclectic sensibility rooted in 80’s funk, 90’s hiphop and jazz fusion which renders him with a unique and recognizable voice, through a focus on progression, structure, improvisation, and nostalgic productions that are allowed to breathe (think Patrice Rushen). Tracks off this EP were featured in the late night selection on Studio Brussel, ao. Hot Rain which also appeared on the Brownswood Electric 3 compilation.

One year after the release of his first EP, Pomrad released his This Day EP in April on London label Earnest Endeavours. This Day put Pomrad firmly forward as one to watch, with big support from Belgian press & radio, but also Gilles Peterson, XLR8R, Inspector Dubplate, Simbad, Toddla T, Giraffage, Snakehips,… From This Day single Pomslap was featured heavily on the StuBru daytime playlist.