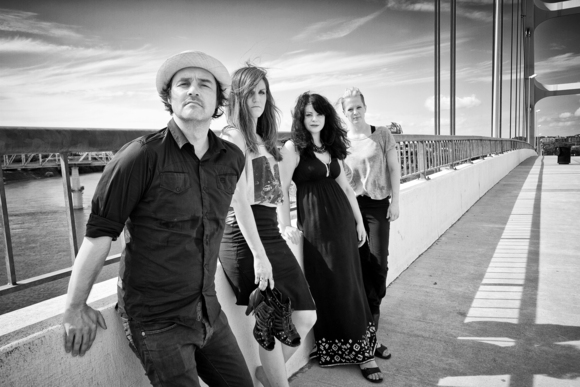 ”The retro-rock of this wild bunch is like a kick in the solar plexus.” - Darryl Sterdan (Canadian Sun) Rooted in rock, albeit with a Scandinavian edge comes Oslo’s Phone Joan.

A four piece “wild bunch” that is known to play their rock as if their lives depended on it.
Nevertheless on their new record “Turning Pages” it sounds like they have played around and had fun from the beginning to the end.

It reveals the sound of a closely knit and confident band that during some intense hot July weeks manage to turn Norwegian Jante Law ("Thou shalt not think thou art someone") into American platitude and adopt a fifth member; the Grammy Award winning producer who invited them to Nashville, Vance Powell; Jack White’s merited right hand, producer and engineer.
The result of Powell and Joans collaboration is an 11 track solid album.
First single is the title track “Turning Pages”. The rock-nerds track, a song in honor of those who know their rock history, and to the legends that wrote it.

The first time I heard Phone Joan, all I could think of was "how the hell to get this band to let me record them.."
Now that that it has become a reality all I can think is "I can't wait for everyone to hear this.."
- Vance Powell

One can easily be led on by the American dream and end up lost amongst great plans and wild dreams. However, Phone Joan knew exactly who they were on their way to when they got on a plane to Nashville, Tennessee, a city known for its music industry. A trip that would not be possible if it wasn't for borrowed means from two of the band's grandmothers and the invitation from Jack White's bearded star producer Vance Powell.

Phone Joan play rock as if their lives depended on it, and are not afraid to admit the graveness of what they are doing. Still, this record sounds as if they have played and had fun from start to finish. The sound is that of a closely knit unit who, during some intense July weeks in 2013, turned Norwegian Jantelov ("Thou shalt not think thou art someone") upside down into American confidence, adopted a 5th band member and gave life to the term Grannies for Rock.

When the band's previous album +47 91799466 was released in 2012, the press acclaimed it as a remarkable sequel to the debut The Early Sounds of Joan. Phone Joan had grown. Become more precise. Edgier. Something original. Too good to be Norwegian was the headline of a two page article in Norwegian paper Klassekampen about Phone Joan. Journalists agreed on the tag blues based 70s rock, with elements from the best of rock music from the last four decades, ghospel, soul and shoegaze.

"The songs on the third album are more straight forward and structured. The lyrics are more personal, with increased focus on our own lives, our history as a band as well as general issues that many people will be able to relate to.", says bass player and singer Randi Gudmundsen. And something has happened. As much as the lyrics clearly belong in the traditional rock category, this time there is left no doubt as to who is the sender of the message they are
delivering. You'll find recognizable phrases, references and hints towards the bands sources of inspiration, but a band that means something and contributes to renewing and modernizing a lyrical tradition with a tendency to get stuck in the past, is refreshing.
This can also be said about the music. Phone Joan know how to benefit from, and balance safely on the shoulders of, their role models. But the guitar riffs and the classic drum beats have been chewed long and hard then spit out. Riffs you think you recognize end up taking a whole new direction. The backing vocals and the vocal phrases contain equal parts Beyoncé and Robert Plant. The new songs show that they go their own way, dare to think big, but still give the listener a feeling of closeness and warmth.

Vance Powell has contributed to accentuating the details and almost built a new wing with room for vast amounts of backing vocals and keys, effects, noise and percussion. Everything neatly organized with respect for the songs. which Rikard Haugen points towards a a common platform: "This is our first album where everyone has contributed in writing the material - this
time every one of us has composed and written lyrics. I don't know, but I think you can hear that all of us feel the cutthroat pressure this time.

Imagining a sound. The collaboration with Vance Powell came to life after an e-mail Rikard sent during the process of making the previous album. It was the sound of Jack Whites many projects, especially The Dead Weather's Horehound that had attracted Rikard. Jack White's solo album Blunderbluss was the best selling vinyl album published in the year 2012, selling over half a million records. Seems almost insignificant to a band that now has achieved their
desired sound. You see, Vance answered quickly and eagerly - Yes - to their request to mix +4791799466, on one condition: the band's third record would be recorded in Sputnik Sound in Nashville with himself as producer. Drummer Elisabeth and the rest of the band do not regret the choice of going abroad: "Traveling such a long way gave us a chance to really unite as a band. In short summary, it's a mix of professional context and great competence, there for
us to fully benefit from. The studio served as a haven for free creative flow from day one, with a constant and unconditional focus on musical matters. That created an atmosphere where everything is allowed and Wrong is Awesome.

During the anniversary of women's right to vote in Norway, it would be inherited and borrowed means from two strong grandmothers that made the dream come true. Can Grannies for rock contribute towards tearing down some worn out conceptions about genre and roles - we'll see. But those constantly asking for more women in Norwegian rock can get their answer: They've been here a while, and they do it their own way.

A live band of Phone Joan's caliber doesn't really need anyone else to do what they do. Nor is it a secret that the band has always been quite the colorful bunch. They are four hugely different musicians who decided on coming together around one common project, and that's exactly what makes them an exciting and stormy acquaintance.
Strictly speaking, they need only each other, but Vance Powell turned out to be the one who succeeded in making the most out of the broadness and capacity that the four members of Phone Joan possess, and fully take advantage of the contrasting musical references.
Lead singer Carina Moen sums up why Phone Joan has, so to speak, adopted Vance Powell as a fifth band member and why we should take a good listen to Norwegian rock's best album in 2014: "For starters - he is The Wizard of Rock'n roll - he has recorded, produced and mixed several of our favorite albums within the rock genre. Now also because he is a hell of a good guy, who we have come to love very much. A team mate, mentor and friend."