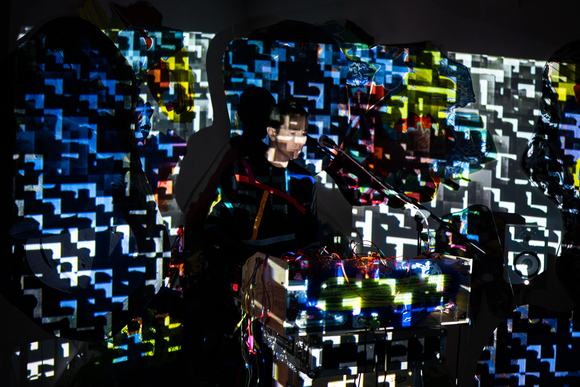 Peter was born in eastern Germany behind the iron curtain in 1981 in a town which back then was called Karl-Marx-Stadt.


He had had problems speaking and fell into a dream world
never to return. He started oil painting and song writing at the same age
of 15 or 16. He split up in identities, later reunited. was born again
in 2006 under a spell: Peter Piek whose only goal is
to melt music and painting to a new form of art. you know like
music and acting once morphed to opera. of course it shouldn't
have anything to do with opera and acting.
he manage to have concerts and exhibitions in 30 coutries on 3 continents.
Not because poeple like his work, mostly because he enjoys travelling.
He thinks life is short, perhaps too short. Certainly
too short to do all the things he wants to do.
Peter is a German painter, singer-songwriter, multi-instrumentalist, author,
and performance artist. He lives in Leipzig, Germany as well as on the road,
endlessly performing concerts and exhibiting his paintings in more than 30 countries
across three continents.
His voice is high with a sense of emotional intimacy, painting brushstrokes
with his words just as he creates love melodies on his canvasses, giving those
who experience his art a sense of appreciation for his ability to fuse his talents
into one seamless and timeless form.