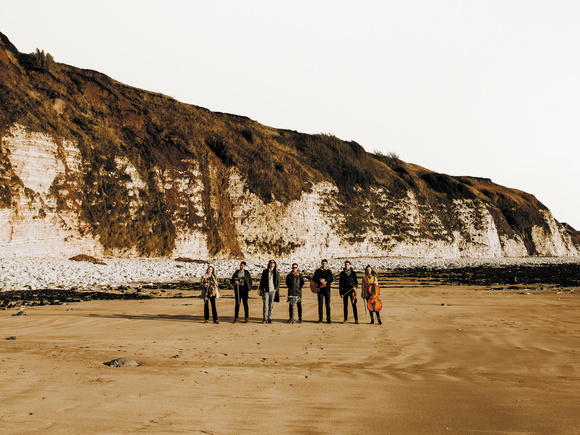 Pavey Ark are an Alternative Folk band from Hull.

Atmospheric vocals and strings glide over finger-picked guitar, melodic bass and complex percussion. The result is a beautiful cinematic-folk sound that evades immediate comparison. Upon further listening, the band’s wide range of influences start to reveal themselves. From the laid-back 60s & 70s folk of Jackson C. Frank and Rodriguez, through to Nick Drake and Radiohead. The band have become known for their enchanting live shows, and are thrilled to be playing one of the main stages at Glastonbury 2022 – a huge achievement for an independent act. Previous live bookings include Moseley Folk Festival, Cornbury, Bearded Theory and Boomtown Fair, and the band recently supported This Is The Kit. Pavey Ark’s debut album "Close Your Eyes and Think of Nothing” was released in 2020, receiving critical acclaim from UNCUT, Record Collector and Folk Radio, and BBC Radio 6 Music airplay form Mark Radcliffe and Chris Hawkins. Their second album is due for release in late 2022.

FOLK RADIO
"Pavey Ark set themselves up as a simple folk band then pull the rug out from under your feet. A call to arms from a band that demands to be heard."

The Scottish Express ★★★★
"This set of folk pop, quietly sparkles. Whether it's the dreamy cuckoo, the lovestruck Hidden Hills or the romantic Breaking Out. Best thing to come out of Hull since the Beautiful South”