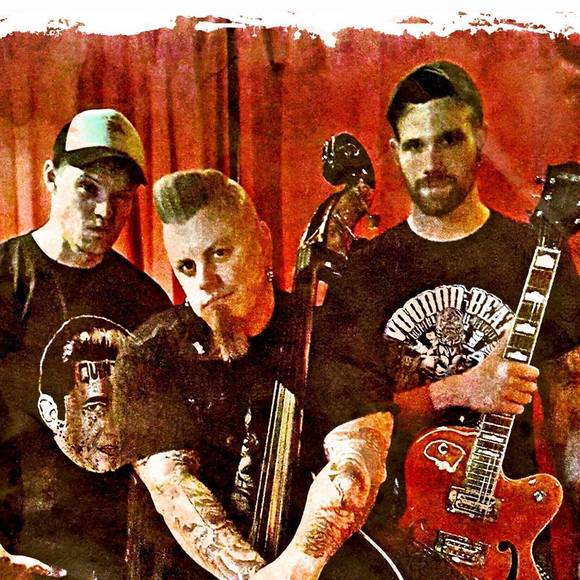 OUT OF LUCK was established in the fall of 2007 by Karl Rascal (also known for his activities in bands like the Frantic Flintstones).

OUT OF LUCK plays a wild mixture of Rock‘n’Roll and Psychobilly with the energy of Punkrock. It’s time for rough and unpolished Rock'n’Roll again - that’s the idea of the band.

Lyrics like “pissed off from everyday’s shit”, “I’m stranded” or “for a few bucks…” are standing for the name OUT OF LUCK. After the successful release of their debut album "Out Of Luck" in 2008 (Wolverine Records) and heavy touring all over Europe, the band released their second Longplayer “Walking down 10th Street” in the fall of 2009 (Wolverine Records).

OUT OF LUCK already played with bands like Mad Sin, Batmobile, Frenzy, Demented are Go, Nekromantix or The Forgotten, V8 Wankers and Nine Pound Hammer, which emphasizes their live qualities.

Some mentionable gig highlights were the PSYCHOMANIA RUMBLE, the BEDLAM BREAKOUT in England, the PINEDA PSYCHOBILLY MEETING in Spain, the CLUB SIN in Finland or the legendary SATANIC STOMP in Germany - the biggest Psychobilly festival in the world!

In January 2012 OUT OF LUCK presented their most extensive and stylistically refined album to date on Part Records:
“Greetings from Outbackville”! This record reflects the style of the band perfectly - from roughneck Rock'n'Roll and Rockabilly to classic Psychobilly.

Flopez left the band in 2012 due to personal reasons. The new man on guitar was Karl's longtime buddy Rocky and once again they played gigs all over Germany, also on the PSYCHOBILLY EARTHQUAKE.

OUT OF LUCK was in the studio again to record the fourth album „Killer Coupe“ - of course still stickin’ to their typical and rough style. The CD (2014) and blue vinyl 10 inch (2016) were released on Part Records.

In 2015 they made a great catch with Max Mambo who replaced Beppo on the drums who decided to leave the Band. They appeared on the WALLDORF WEEKENDER and the PSYCHOBILLY MEETING in Spain again.

Another significant lineup change happened in 2016 when Mike Mess replaced Rocky who unfortunately lives almost 400 km away from the other guys. The Band was finally able to practice on a regular basis again and push it to a whole new level.

The fifth album called "Breakdown in the Desert" was released in the spring of 2018 on Part Records again and it's also the first CD recorded by the current lineup.

So stay tuned and have fun with BEER, FUEL and ROCK’N’ROLL from Lower Bavaria!