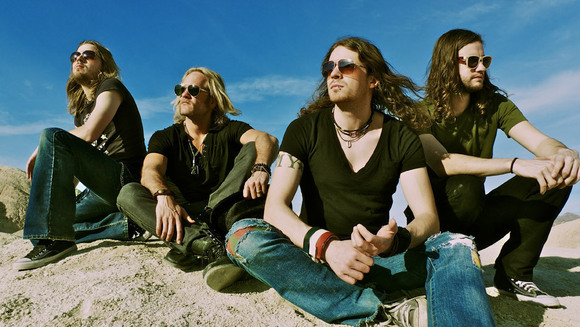 The spectrum of modern rock is typically split into two camps, with slick commercial chart-toppers on one side and flavour-of-the-month indie acts on the other.

And then there’s Vancouver’s One Bad Son: an honest to goodness rock ‘n’ roll band that occupies a world of its own, cutting through the bullshit with cranked up amps and a resolutely DIY approach to music making.

Singer Shane Volk, drummer Kurt Dahl and guitarist Adam Hicks first joined forces in Saskatoon, in 2004. The three friends moved into a house together, forming a tight-knit brotherhood and spending every free moment jamming and building up a catalog of songs. They independently released the albums This Aggression Will Not Stand in 2006 and Orange City in 2007. But it wasn’t until Adam Grant joined on bass in 2007 that the band was truly complete.

One Bad Son’s reputation for tight musicianship and explosive, unscripted live shows spread through word of mouth, and before long, the group was playing to sold out venues in its hometown and embarking on a string of well-received national tours. This propelled the outfit to high-profile opening slots for Godsmack, Buckcherry and Default, and the singles “Rustbucket” and “Retribution Blues” received Canada-wide radio play.

“We’re outsiders and have always operated in our own bubble, apart from whatever is happening in the rest of the music biz,” says Dahl. “We’ve never had things handed to us…we have to work our asses off to get them.”

The four friends relocated to Vancouver in 2011 — a bold move, considering their loyal following in Saskatoon. After a few months of steady gigging, the band had won over a new legion of fans and inked a record deal with the local 604 Records, which released the band’s self-titled 2012 album.

With a slow response initially from radio stations across Canada, the band decided to show up at various rock stations in Western Canada to play their song “Scarecrows” in person. To the band’s surprise, the tactic worked and ended up taking them from Vancouver to Ottawa, and resulted in a surprise hit with “Scarecrows”, which went to #5 across the country. The band returned home to Saskatoon to shoot the video for the single, which featured a crowd of their local friends and fans.

Following the success of “Scarecrows”, the next single “It Ain’t Right” went to #11 and the follow-up “Retribution Blues” went to #6, which propelled the band to spend half the year on the road, breaking these songs the old fashioned way: piling into a van and logging an insane amount of miles, back and forth across the country a dozen times. They became road-savvy, and started to gain the following that Saskatoon knew they could.

One Bad Son’s passionate and uncompromising songs are the product of years of devotion to the life of rock ‘n’ roll. Of course, the guys are no strangers to hard work. Volk observes, “I’m a farm kid. Kurt’s dad is an auto body man. Adam’s dad is a painter. That’s what we grew up with. It’s a really good reflection of where the band has been the last few years — just working, working, working.”

Now that the band is finally seeing its labour pay off, don’t expect One Bad Son to compromise its independent spirit and timeless approach to rock music any time soon. “We’re four guys who write all the songs together,” Dahl asserts. “We play our own instruments. We don’t play to backing tracks. We’ve lived together as a band. We do things our way. If that’s old fashioned, that explains what the hell is wrong with rock ‘n’ roll today.”

He continues, “There’s no one else pulling the strings behind the scenes. We live and breathe this band and these songs. That’s what real rock ‘n’ roll is all about, to me.”