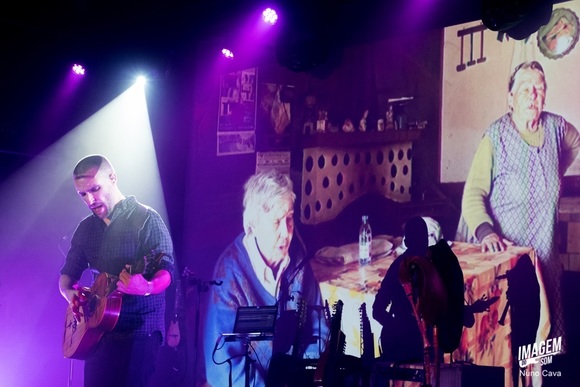 Omiri is one of the most unique projects in reinventing traditional Portuguese music.

To reinvent tradition, nothing better to bring to the show itself the true stakeholders of our culture: musicians and sounds from all around Portugal playing and singing as if they were part of the same universe. Not in the flesh and bone but in sound and image, serving as a basis for Vasco Ribeiro Casais musical composition and improvisation.

Omiri also proposes a ball where all the tunes played are danceable, according to the rhythm and balance of Portuguese traditional dances and not only (Repasseados, Drum’n’bass, Malhões, Viras, Break Beat, Corridinhos...).

Omiri is, above all, remix, the culture of the XXI century, when mixing in one show already forgotten musical practices, making them permeable and accessible to the culture of our day, synchronizing shapes and songs of Portugal rural tradition and the language of urban culture.

In Omiri music and Portuguese culture is rich and enjoys herself.

““Baile Electrónico” has here real moments of genius of a multi-instrumentalist, arranger and producer of a rare sensitivity(...) it's a huge record.” in ofado.pt

"This recording has energy and coherence, and is one more step forward on an interesting artist's journey." in rootswold.com

(...) “harmony between sound and video, rural and urban (...) in tracker-magazine.com

(...) “one of the most original and exciting musicians to pick up on the Portuguese traditional rhythms” (...) in Songlines

(...)”the sound power of tradition nowadays.”(...) in amusicaportuguesa.blogs.sapo.pt