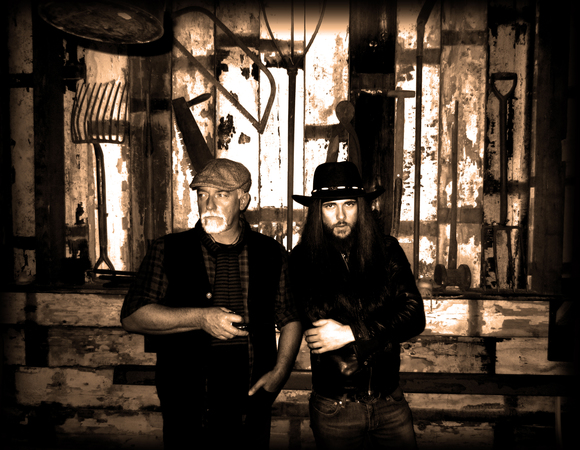 Old Dollar Bill Comprise of Ed Henry and Stephen Clark who first met at a traditional music session in July 2009 and have since performed together as a duo and with fellow musicians from all over the world.

The 2009 Edinburgh Festival catapulted their popularity and Old Dollar Bill have since gone from strength to strength in both live performance and recording situations.

The 2010 Edinburgh Festival pushed Old Dollar Bill's popularity and success even further with initial runs of the Self Titled Debut Album selling out in a very short space of time. In addition the album has gained international recognition and acclaim with glowing endorsements from Ike Sheldon of IMA award winners and Celtic Connections favourites The Wilders from Kansas City Missouri.

In September 2010 Old Dollar Bill performed as part of the Dark Holler III Festival in Stirling alongside Furnace Mountain from Virginia
and in October Old Dollar Bill embarked on their first French tour which was a huge success with talks in place for further tours in and around Europe and also the U.S.

2011 proved to be another great year for Old Dollar Bill,
a year that saw them record with great musicians from Woody Pines
to Ike, Nate and Phil from The Wilders resulting in the release of their new single 'Lucky From Kentucky' and their E.P 'Across the Tracks'
giving Old Dollar Bill a total of three original releases in under three years.

In addition, all 3 releases while available on CD in 2011 also become digitally available on Spotify, Amazon, Itunes, napster and many more.

2011 not only gave Old Dollar Bill the opportunity to record but also perform with great musicians live from the likes of The Hot Seats toTOKYO ROSENTHAL, and in terms of Old Dollar Bill's own live performance 2011 saw them expand both in musical repertoire and instrumentation with the aim of constantly improving while still maintaining their expected high standard.

"Old Dollar Bill are a grand addition to the local canon of Scots combos who can summon up a genuine feel for American music.
In their case it's old time good time stringband hoe-downs and rollicking country songs."

In 2013 Old Dollar Bill released their first 'Live' CD entitled 'Live & Cookin'. Recorded at Leith Folk Club in May of the year the release is an EP featuring 5 tracks and ODB compadre Michael Wiedenhof on Double Bass. 2013 also saw ODB embark on another succesful venture to France as well as continuing a prolific series of gigs at home which would put most touring bands to shame!

Continuing their relentless quest to stabilize a larger line-up proved both challenging and educational. Luckily benefitting from the talents of several great musicians the ODB sound was seen to expand and develop when at the beginning of 2014 Old Dollar Bill headlined the Leith Folk Club for the second time and also Bannermans, Edinburgh's top rock venue. October 2014 saw another successful tour in the South West area of France.

Not forgetting to record! - ODB produced their second live EP hosted by The Harbour Inn Newhaven (run by good friends John and Karen Martin) a regular gig venue throughout the years. The EP showcases ODB’s alter ego performance line-up (Bills’ Ruckus) featuring Mr Ali Whitwell on vocals and guitar. This was a long time coming and was well worth the wait. Since then Ali has continued to perform regularly with the band to much acclaim.

So here we are in 2015 with ODB currently writing and showcasing new material and filling the stage with even more gear!
Ed has expanded his set-up to include one of the most unusual percussion kits encouraging comments of almost disbelief that such a set-up can produce what is now the rhythmic backbone of the band. Steve has expanded his set-up by way of additional acoustic guitar(s) and the clever implantation of electronic pickups for all instruments. A French tour for this year is already set in stone with more gigs on the itinerary and more miles to cover.

Discussions with a prominent studio/producer are underway for a collaboration which will see ODB diversify their sound and product in a most unexpected manner. More to follow..........