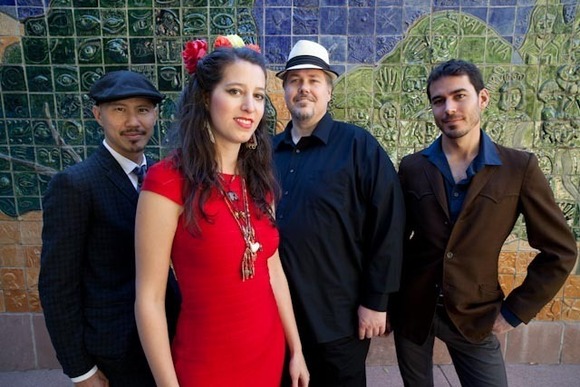 The quartet of Elisa García, Daniel Ondaro, Kailin Yong, and Brett Bowen weaves a romantic sound that’s rooted in musical traditions from the Americas but is not afraid to re-invent them.

NuMundo began in 2011 when violinist and composer, Kailin Yong, decided to bring the other three musicians and friends together to form a band based on the concept of building a bridge across the Americas.

Singing in English, Portuguese, and Spanish, the powerful and sultry vocals of Elisa Garcia soar through space, invoking a fiery passion that connects with her South American origins. The dulcet and virtuosic strings of Kailin Yong’s violin not only showcase his amazing talent, but also reveal a deep understanding of different cultural traditions, making him a true world music artist. Guitarist, Daniel Ondaro, brings his studies in Brazilian music along with his Cuban-American background that is a perfect addition to NuMundo’s Pan-American sound. And, indubitably, that unique yet traditional sound is held together by the steady hand of world-percussionist, Brett Bowen.

In 2012, NuMundo recorded and released their debut album titled Our Song, and was invited to perform on the main stage at Bohemian Nights at NewWestFest, alongside Gypsy Kings and DeVotchKa.

NuMundo’s music bridges the Americas by crossing international boundaries and inspiring feelings of connection and joy between people of diverse backgrounds, languages and cultures.