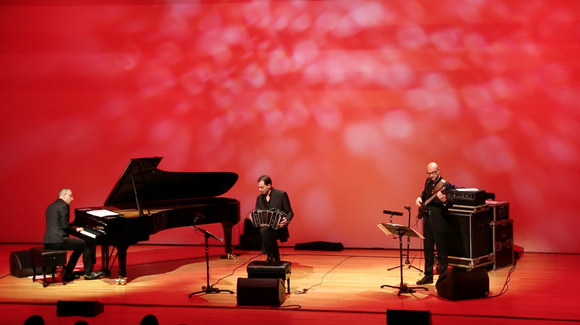 The NUEVO TANGO ENSAMBLE was born in 1999 starting from a deep admiration for music from Argentina.

The trio has established its own identity well recognizable, into which the lesson of classical music, tango nuevo, an Italian melodic sensibility and a conception of authentic jazz performance. The music of the great composer Astor Piazzolla, who had grandparents from Puglia as the three musicians, was therefore assimilated and converted into a new synthesis between the classical music, tango nuevo and jazz that the three musicians have always loved, between the discipline of written and structured music the recognizable Italian character of their melodies and improvisation that makes their every concert a unique event.

In 2002 was released the first CD "Astor's Mood” by the classical label Realsound.

In July 2005 was released the second album: "A night in Vienna for Astor Piazzolla". It’s a live CD recorded in Porgy & Bess in Vienna. The album was produced by the prestigious Italian jazz label Philology Jazz Records.

In 2008 German label Jazzhaus Records released the album "Tango Mediterraneo". For CD they worked with Gabriele Mirabassi who has one of the best clarinet player of the world.
The album will include primary self-made compositions of Pasquale Stafano and Gianni Iorio besides two Astor Piazzolla interpretations.

On 27th of May 2011 was released new album "D'impulso" by label Jazzhaus Records. Javier Girotto is the guest of this album. On July 2014 this album is been released also by Stomp Music Records in South Korea for koean market.

Every album had a lot of great and positive feedback and reviews by the most important magazines all over the world.

In 2012 the band was invited as music guest in one of the most famous TV Show in Italy on RAI 2 National TV called “I fatti vostri” for six time and performed Italian songs with particular music arrangements. In the same year the trio, invited as guest of Radio Music Program on RAI Radio 3 Fahrenheit, performed a live radio concert with interview. The trio did a lot of radio and video interview for Radio RAI 1, RAI 2, Radio Capital, Radio Città Futura, Radio Warsaw, Radio Cracow, Radio Bratislava, Radio RTL 102.5 and VERO TV