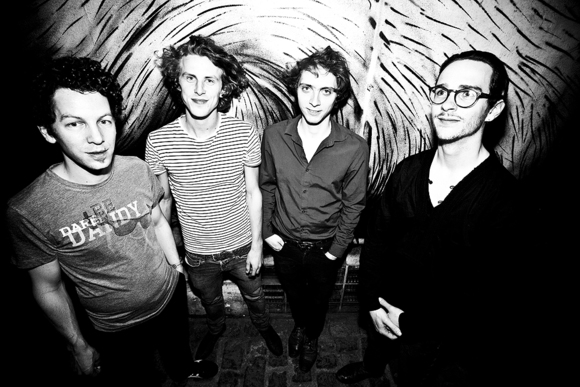 Nordmann is taking Belgium by storm.

Their mixture of jazz, rock and creative experiment driven by an unique sound and energy is set to make them a favourite on the Belgian live circuit. Nordmann’s restless rhythms and grinding grooves alternate with intimate soundscapes and open improvisation.

The band formed two years’ ago in Ghent, where the four young musicians were students. They refined and matured their idiosyncratic style and jazz contest successes quickly followed. Winners of the Belgian Muziekmozaiek Jazz Contest 2012 and the Storm! Jazzwedstrijd 2013, Nordmann took third place in the prestigious international jazz contest at Jazz Hoeilaart 2013. Furthermore Nordmann achieved a very nice second place in Humo’s Rock Rally 2014 prooving that they are just at home on a rock stage as at a jazz festival.

The compositions are off-the-wall, home-baked creations that go from desert-rock to avant-garde but all with their distinctive sound. The playing is daring, sometimes explosive but always honest and often with a quirky sense of humour.

Nordmann will be releasing their debut album in February 2015.