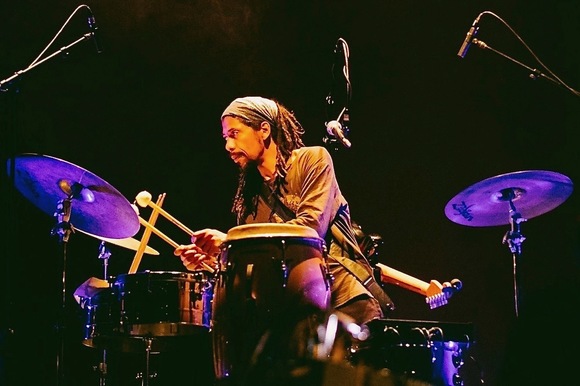 A performance by NKiSHi will always be guided by his passionate and musical appearance, his desire for improvisation and acute response to each given moment, thereby transforming a music concert into a uniquely exciting happening.

Singer songwriter-composer, multi-instrumentalist and producer Dodo NKishi’s current musical collaborations with artists as diverse as Mouse On Mars (since 1995), half past selber schuld (since 2010), Batila & The DreamBus (since 2013), Bellwood & The Soul Ambulance (since 2014) and Africaine 808 (since 2016), leave no doubt as to his incredible eclectic sense of music making.

Add to this sporadic involvements with such highly esteemed and different kinds of artists like Herbert Grönemeyer (on Germany’s best selling album since 1975, „Mensch“), Stewart Copeland (during his 2006 Italian Tour), Riccardo Sinigallia or even a 70s Rock and Pop classics Choir of 60+ year olds (known as High Fossility), and one might begin to imagine the enormous musical range and profoundly anti-categorising prowess exhibited with his every performance.

Thus witnessing the kaleidoscopic nature of NKiSHi’s own compositions in a live concert setting, promises to take us on an intimately joyful and inspiring round-trip to some of the farthest corners of rare funky rhythms, and rhymes of deepest philosophical reflections, where One Love is at once the symbolical vehicle and the all encompassing backdrop.

For a detailed discography/biography please use the contact address.
1❤️