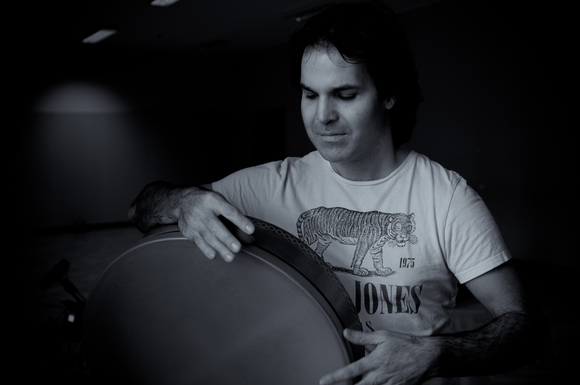 NIMETU alias Andrej Hrvatin is a musician and sound artist from Maribor, Slovenija.

His main inspiration and frame drumming "lineage" can be traced through Nino Mureškić to Glen Velez and Layne Redmond.

He was involved in several music and dance performances, such as "Doors" by Branko Potočan, "Saltana" by Edita Čerče, "Dia Diasso Diaspora" by Maša Kagao Knez, "Direct Insights" by Tina Dobaj and many others.

Part of his work was also dedicated to recording sound for film and television.

He was artist in residence at Sonic Art in Delhi, India in 2008 and performed at ISIM conference in New York with pianist Ji Eun Moon in 2014.

He is currently focusing on deeper connections between music, philosophy, transcendental states of mind ("shamanic" explorations of art, sound and body), offering frame drumming classes, music journey concerts (Spirit Flute Journey, Locus Solus) and develops dance and music productions as Lamug-Zi collective with Tina Dobaj and others. With the latter he also developed a highly effective treatment combination of music and shiatsu massage - M.S.T. which they currently offer as a "therapeutic" session, but plan to share the knowledge and practice with other practitioners in the form of seminars and lessons in the future.