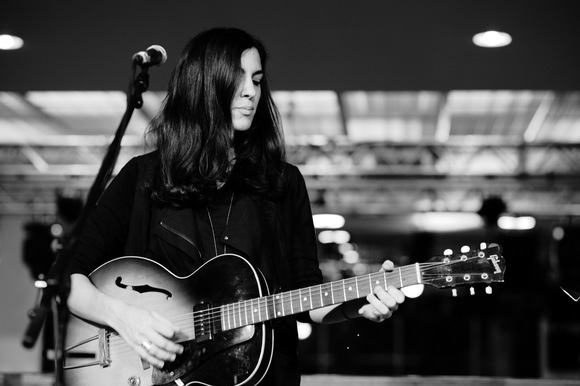 Nadine Khouri is a Beirut-born musician and songwriter currently based in London.

Influenced by dream-pop, film soundtracks and spoken-word, her sound has been described as a “music born of perennial outsider-status.” Noted by producer John Parish (PJ Harvey, Giant Sand) for her voice, Khouri was invited to sing on a track on his Screenplay LP and subsequently recorded her latest album with the legendary producer in his hometown of Bristol.

Released in February 2017, the album cemented Khouri’s one-to-watch status, was hailed by MOJO as "A thing of dark possessed beauty” in their four-star album review, celebrated by Q (Feb 2017 Critics Choice) and selected as one of Rough Trade’s Albums of the Month. Acclaimed music photographer Steve Gullick (Nirvana, Bonnie ‘Prince’ Billy) shot Khouri’s press photos and cover art. He also directed the video for “You Got A Fire”

Khouri has performed in some of London most prestigious venues around Europe, including Royal Festival Hall, Paradiso, Botanique, and has shared the stage with Low, This is the Kit, Aldous Harding, John Parish, and many more.

“Khouri’s voice is breathy, sensual, beguiling, meditative and her phrasing is a joy” – R2 ★★★★★

“A pocket-sized book of lullabies, and gothic shanties, whose sounds and lyrics evoke a series of wondrous daydreams and sorrowful, mood-filled, late-night tales.” – Drowned in Sound

“The voice. It’s the first and last thing you notice about The Salted Air, a dreamy, handsome, hushed album designed to be played in the blue hours of night, a thing of smoke and pearls and silvered mirrors and bruised hearts.” – The Herald

“Nadine Khouri has always had the ability to make quietness and subtlety sound huge and mean more than it possibly could… The overwhelming breathless cool of Nadine’s voice is something that you cannot go without hearing.” – The 405