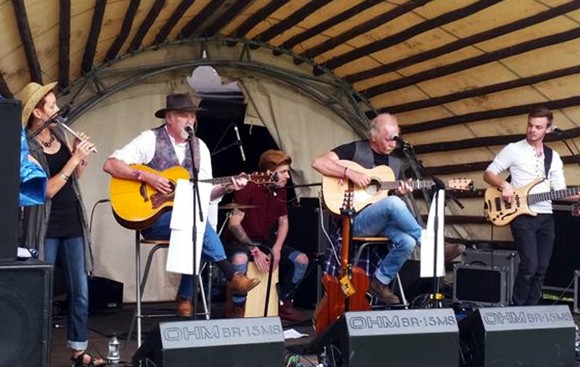 From the intimacy of packed out Northern Quarter venues to the St Patrick's Day marquee in front of Manchester Town Hall to a 'thrilled' audience at the Ramsbottom Festival, Kendal Calling and Bluedot Festivals, to numerous live and recorded radio gigs (including one of Desi's solo tracks being featured by Graham Norton on his Radio 2 show), MUSAIC perform original roots-based songs and tunes. Desi Friel (guitar/bouzar/vox) and Paul Cunningham (guitar/vox) both grew up in Northern Ireland during the troubles, but met in England many years later. Together with Lynn Holt on flute and whistles, they form the heart of Musaic. They are usually joined by Sam Cheshire - a young house-music producer from Rochdale - on keys, Adam Rogers on cajon and percussion and Dave Butterworth on bass. The vastly differing ages and backgrounds of all the members bring an amazing new twist to the traditional celtic genre, and show how music can cross all generations and styles. Desi and Paul's original songs tell of history, protest, longing, homelessness and compassion, and a sprinkling of traditional covers always get the audience up on their feet (and often on the tables!)