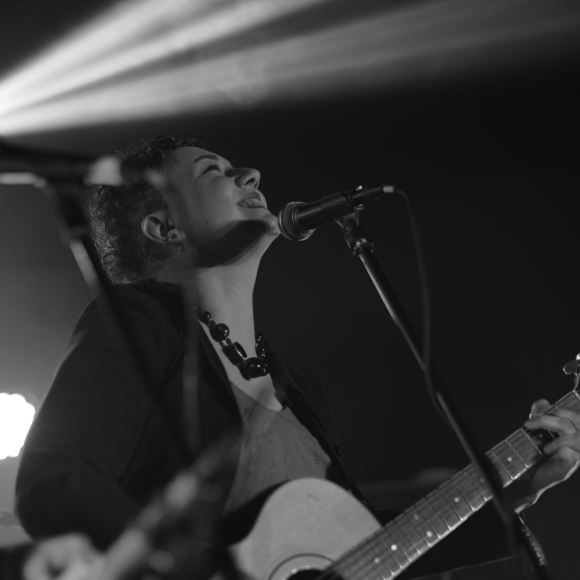 I play gigs in and around Liverpool. I have also performed in America, Italy, London, Manchester, North Wales and Cardiff.

I am also the founding member and lead singer of a group of multidisciplinary musicians blending folk-punk sounds with biting lyrics & harmonies [formerly performing under the name MOXIE]. Currently developing a debut EP.

In 2015 we were selected for Glastonbury Festival’s Emerging Talent Competition’s Longlist; where 120 acts were chosen from 1000’s who entered. Clash Music selected my song ‘Ten Years’ for its: “skillfully executed, folk-derived songwriting”.

I am a member of Sense of Sound singers and have been performing with them since early 2005. We have performed/taken part in the following events: Migration Music at The Everyman with SK Shlomo; Star Wars in concert at the Echo Arena; Russell Watson’s UK tour; Paco Pena in Requiem For The Earth; Syd Barret Tribute gig at The Barbican with Pink Floyd, Damon Albarn, David Coulter, Chrissy Hynde and Thea Gilmore; Plague Songs at The Barbican with Damon Albarn, David Coulter; Rufus Wainwright, Patrick Wolf, Kenny Anderson [King Creosote] and Imogen Heap; Finalists of BBC1’s Last Choir Standing [2008]; Songs of Praise; Liverpool The Musical at The Echo Arena alongside The Farm, Garry Christian, Dave Stewart and Ringo Starr; The Royal Variety Performance alongside Seal and Jon Bon Jovi; BB3‘s Liverpool Nativity; Finalists of BBC radio 3 choir of the year [2006]; Olympic torch relay in Liverpool; Brouhaha festival; 5 Minutes To Midnight: and Greenpeace anti-trident campaign with Damon Albarn.

I am also a former backing vocalist for Science of the Lamps. I most recently toured with them alongside Moulettes and The Slytones.

I regularly host Mellowtone’s Open Mic night at The Magnet and I have worked for the following clients providing original and/or cover songs for events/gigs: Head Out Not Home; Rachael Bampton-Smith Marketing & Events; Rock & Roll Marathon; and We Make Places CIC.