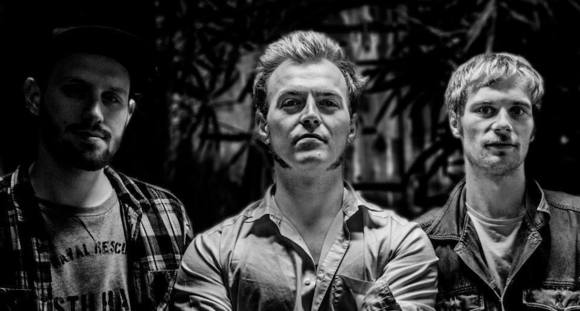 With their modern approach to 80s inspired alternative rock song writing, the band has made a name for themselves in Denmark, playing lots of shows alongside other critically acclaimed artists such as The Kissaway Trail, The Broken Beats, Kellermensch, THE 1975 (UK), Summer Camp (UK), Gardens & Villa (US), And Also The Trees (UK) and many more.

Their debut album "Elba" is released by Target Records/Soulfood Distribution in Germany, Austria Switzerland on 11 August. - Single "John Wayne" is out now on !

The band started as a musical playground in 2012 between Andreas and bass man Kasper Nissen (of The Rumour Said Fire), and recorded an EP which caught the attention of the media and kick started the band.

Since the early days, the band has been a work in progress with mixed musicians revolving around Sorgenfrei as the leading man. Within the short period of time that the band has existed the band has been playing a long series of concerts in Denmark and Germany, supporting well established Danish acts such as Kellermensch, The Broken Beats, and The Kissaway Trail, as well as international – THE 1975, And Also the Trees , Gardens & Villa, Summer Camp, to mention a few.

In 2013, Mount Rushmore Safari released their first full-length album “Elba” through Target Distribution. The album got fine reviews in Danish media, and got some attention from across borders as well. - German webzine Indieberlin saw the band play in Berlin and did a review on the album saying: ”Sorgenfrei's vocals really shine out on this record. In the song 'John Wayne' in particular he begins the song with a conspicuous Spaghetti-Western-tinged accent, moving seamlessly into his bright falsetto”.

British radio Amazinetunes has been quite fond of the band since their first EP came out in 2012, and had this to say of the long awaited debut album: ”It’s been said before, but bears repeating, we do love a great Scandinavian band. Mount Rushmore Safari is such a band…We told you to listen, we told our friends to listen, we pretty much told everyone that we met to just have a listen & you did.”

In 2013, Mount Rushmore Safari signed a distribution/booking deal in Germany to release “Elba” in Switzerland, Austria and Germany in 2014, where the band will be touring in the Fall.
Meanwhile, the band is already busy in Aarhus, Denmark recording their next album. Which like “Elba” is produced by Thunder & Lightning Music, and pointing in a slightly less electronic direction than the debut, and with a more rocking feel to it.