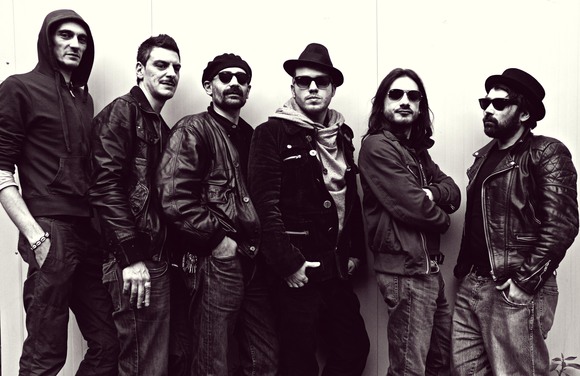 A bastard performance of modern Jazz based on riffs looped till monotony.

Mop Mop is the brainchild of Andrea Benini, musician, producer, DJ who has been active for more than ten years exploring a large variety of musical genres, from Club to Jazz music. Anyone familiar with Mop Mop will already know that their refined style has already lend them a unique place somewhere between the worlds of Jazz, Funk, Latin and the Italian Postmodern style allowed the band to achieve the international film business as part of Woody Allen‘s ‚To Rome With Love‘ movie soundtrack. But with their latest LP ‚ISLE OF MAGIC‘, Mop Mop digs even deeper to bring us one of their most engaging and organic records yet. Mop Mop‘s fourth studio album has come together over the course of a couple of years where producer Andrea Benini has been searching for new directions with the band.
In March 2013 Mop Mop released their fourth studio album ‚ISLE OF MAGIC’ on AGOGO RECORDS. It contains 13 tracks of pure Voodoo Jazz, Caribbean flavours, Afrofunk, Exotic rhythms and Soul music. The album has been recorded between Germany and Italy with the use of vintage analog equipment to achieve a sound with all the “warm” qualities of vintage analog tape recordings. ‚ISLE OF MAGIC’ is an imaginary land populated by musicians who spend their time fishing, cooking, playing and practicing Voodoo rites at night. It was recognised as one of the best and most innovative Funk albums in many countries. The song performed by Fred Wesley and Anthony Joseph also managed to make it to number one of the best dance floor Jazz tracks for the year. While Mop Mop has gone from live show to live show, they handed their masterpiece over to great producers of eclectic music. It seemed pretty obvious that a masterpiece like this must go to a remix album at some point.
The result: ‚ISLE OF MAGIC REMIXED‘ was released on Agogo Records in June 2014 including 15 remixes by some of the hottest producers in the underground scene featuring Clap! Clap!, Simbad, Izem, Mr. Raoul K, Nostalgia 77, Africaine 808, SoulParlor, Renegades Of Jazz, Phil Gerus, Sola Rosa, Jazzy Gentle, Grant Phabao, Valique, A.K. Tenekdash ranging from Dub Step (Clap! Clap!‘s version of “Let I Go“) to Cosmic Disco (iZem’s interpretation of “Kamakumaba“) and slow Chicago House (SoulParlor‘s hands on “Heritage“) through to dubbed Reggae (Nostalgia 77 on “Run Around“). ‚Isle Of Magic Remixed‘ is the most logical and extremely recommendable next step to 2013.