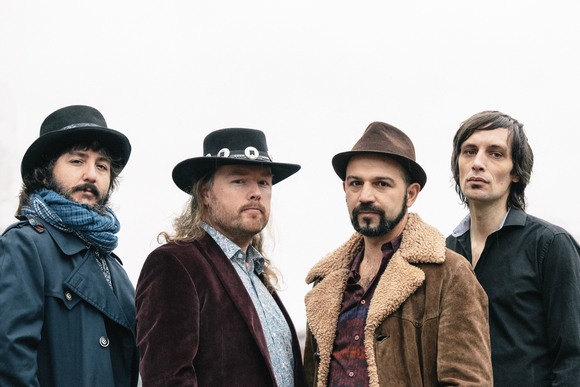 Mongrel State is a four-piece band from Dublin with a sound that incorporates a wide sonic palette - from Rockabilly to Rock, latin grooves and Cinematic Western Scores.

Aside from their unique songwriting, what really sets them apart is the fire, commitment and energy that goes into their live performances.

The band comprises of members from four different countries (hence the name) - Ireland, Italy, Spain and Argentina. The band formed at the beginning of 2015. Their sound is also heavily influenced by various forms of Americana - Rock n' Roll, Rockabilly, Folk & Southern Rock, whilst also adding other flavours to the pot, such as latin-American rhythms and percussion.

Their debut Album was released last January to a very positive response, with reviews in the likes of the Irish Times and Independent (check the accompanying bio below for some of the press quotes).

Alongside this they obtained playlisting of their first single on RTE Radio 1 and an appearance playing live on The Ray D'Arcy show on RTE 1 Television and recorded a live session and interview for the Arena arts show.

They spent the summer playing at festivals all around the country, such as Electric Picnic, Kilkenny Roots, Killarney Craft Beer Festival and other independent festivals such as BARE in the Woods and Knockanstockan and Swell Festival, and Canalaphonic.

What reviewers say about (their new album) "Mestizo"...

"The cinematic sweep of the short instrumental Quiero Volver and the closing Rainy Day offers something more thoughtful, but this opening salvo opts to replicate the live experience and rocks along at pace with Desert Girl, Dirty Trick and the single Stray Dogs all highlights – especially the latter, with its border brass punching colourfully. A lively deposit on a promising future."…. Joe Breen, Irish Times http://www.irishtimes.com/culture/music/mongrel-state-mestizo-a-lively-deposit-on-a-promising-future-1.2512501

"There is some reckless brilliance to Mestizo. It bursts forth on numerous occasions during the record’s 10-track running time, undulating between more standard country-tinged rock Mongrel State do enough to stand-out from the pack."….. Stephen White, The Last Mixed Tape
http://thelastmixedtape.com/2016/01/25/review-mongrel-state-mestizo/

And what they say about the band...

"There are few bands more exciting and popular to have visited us at Leo's Tavern this year. Expect to see Mongrel State storming their way upwards very soon. Addictive music and performance with a new twist." Moya Brennan, Clannad.

"Is there a better country rock band in Ireland?" Stephen Byrne, Goldenplec

"Mongrel State emerge from some wilderness to rock the socks of every single kind of venue or festival you throw at them. I've programmed them at Electric Picnic on the Salty Dog Stage and they are wild pirate-men, on Trailer Park and they shook the foundations of a metropolis of mobile homes, in a back room of an old man's speakeasy and they've had the clientele air-guitaring.... Their set is beautiful and vibrant, powered with an organic energy and the sodding great big smiles of dudes enjoying their music--and they know the way they convert an audience from indifference to indulged inside of two songs" Hugo Jellett, Booker, Electric Picnic Salty Dog & Trailer Park Stages

"Mongrel state create a swagger in the bones of their audience. Having an international lineup injects mood and flavour from an Domhan Mhór, don't miss your chance to dance with these amigos" Dónall Mac Ruairí RTÉ RnaG

"One of the highlights of the festival" David Judge, Director, Canalaphonic, Achill Island Battle for the Lake Festival

"Mongrel State are one of the liveliest bands in Ireland ..... excellent original numbers..... one of the best live shows you will ever see" Uri Kohen, The Electric Cave Production (Director of Westport Bluegrass Festival)

"Watching these guys live brings out the best in everyone within earshot" Keiron Black, Booker, Body & Soul (Electric Picnic)

"Cannot and should not be pigeonholed....a genre all on their own" Roddie Cleere KCLR 96FM

What you should know…
Mestizo, their debut album was recorded with Americana Producer, Artist & TXFM Radio DJ Gavin Glass.

Claudio and Darren, the main songwriters, share lead vocal duties, but all four members sing, meaning there are often four-part harmonies going on . A devotion to old rock&roll and rockabilly is what initially brought the guys together and inspired them to write their own music.