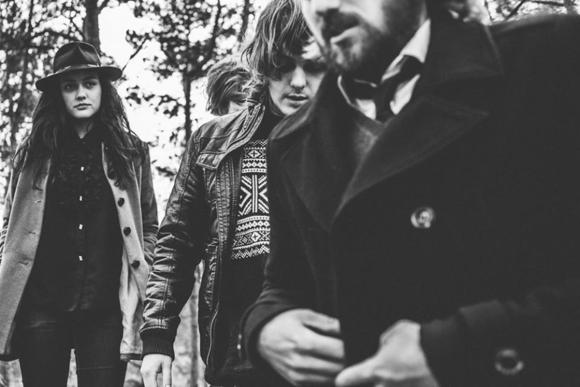 It's almost impossible to write about Mister and Mississippi and not start with a cliché.

Yet, you cannot avoid it when you are writing about the four band members, because sometimes the best things really do happen in the blink of an eye. That however, is an obvious message but there is no better description for Mister and Mississippi. Try to imagine: the four band members met each other in their first year of the Herman Brood Academy, a music college in Utrecht, the Netherlands. They join forces - Danny, Samgar, Maxime and Tom have to write and perform three songs for the Act Development class of band coach Marcel van As (Spinvis, Copark). Although the four of them have different musical backgrounds, they decided in a café, while drinking a beer to accept the assignment to do something completely different and not in the traditional style of a pop/rock band with vocals/guitar/bass and drums. Together they form the band with four eye catchers on stage, like a united front; a wall. The sound: calm and folky, somewhat dreamy but dynamical and experimental without being inaccessible, so that the listeners can give their own interpretation to this unique style of music.

Their very first rehearsal went amazingly well and flew by. "Spontaneous chemistry", they say unanimously. The song Running, which is part of their debut album, was written during the first three sessions. When they left the rehearsal room, the band Mister and Mississippi was born. A band that caused "a little hype" at school. Good news travels fast – the word was soon out that this band was something special. The school assignment was rated "good", the highest assessment mark at school. To get to know each other better, they took a leave for a long weekend in the middle of nowhere. And while listening to the music of Bon Iver, Sigur Rós en Fleet Foxes the four band members wrote their own songs; Northern Sky was one of these songs and when this song was performed during their third live show in Paradiso, as part of a talent contest, it left an enormous impression on the audience and jury. Their fourth show was in De Melkweg Max during the finals of the Amsterdam Popprijs, which they won with flying colors. This was soon followed by shows for the Dutch Liberation Day Festival, De Popronde and the national radio station 3FM. Patrick Watson saw and heard the talented foursome and the Canadian singer chose Mister and Mississippi to be his support act. After their performance Patrick told them he was very impressed by their set. Just like Blaudzun: he let Mister and Mississippi open for him on several occasions during his sold-out Autumn Tour. And now Belgium is asking them to grace their stages, even if though their debut album has not yet been released.

Reyn Ouwehand, the well-known producer and multi-instrumentalist (a balladeer, Kane, Coparck) was selected to fine-tune and finish their yet untitled album. The live-sessions Reyn recorded with the band in Het Huis Verloren leaves a huge impression with the band. They really like his modus operandi. "Reyn is someone who dares to be experimental and has patience. His vision is just as clear as ours. We had good chemistry. His recording studio is an old church, which has such a special vibe. If you listen very carefully, you can hear the sounds of the church on our album, because we recorded everything live." Within a week, it's all done. One album, 11 songs, and a promising future ahead of them, merely 18 months after the band was formed. And that’s why you cannot avoid a cliché like "Sometimes the best things happen in the blink of an eye ".