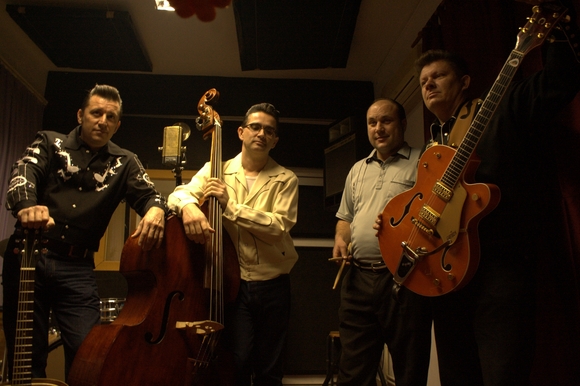 The story of Mississippi Queen began in the fall of 1989, in Zagreb, capitol of Croatia. The band was formed by Jurica Štelma (upright bass), Karlo Starcevic (rhythm guitar, vocal), Renato Zgrablic-Pit (second rhythm
guitar, harp, vocals) and Vedran Žanko (lead guitar, vocals). They played together for over a year, and recorded a few sessions from which tree
songs were published on the compilation tape "Rock this town". These were first official recordings of Mississippi Queen. 1990 was a very successful year for Mississippi Queen, because no other band ever had that line-up with a slapping bass in Croatia. They had hundreds of concerts and several appearances on national TV! By the end of 1990 Vedran left the band, and from that period on, Pit took the lead guitar. The next couple of years,
the band performs as a trio, but just one session was recorded in that period. Those tree songs came out as bonus tracks on the first album,
"Golden years" in 1993. At that time, two new musicians joined the band: Gorana Cehic (fiddle, vocal), and Igor Balent (drums). This album features
the first self-penned song of Mississippi Queen, but no record company showed any interest in it at that moment, so the boys produced it on their own. After a year, the drummer left the band, so they decided to proceed
as a trio again.
The next album, "Ten Years After" was recorded in 1999, with all cover songs, similar to what they usually played on concerts. But after a few years, the band got fed up with doing covers. They wanted to perform their
own songs, and find an audience that would appreciate them. So the band started to write and the album "Did You Say Love" is now a fact. The CD was entirely recorded at the Lightning Recording Studio in Berlin,
2004.for Rhythm Bomb Records,with Ivan Semes-Sammy on the lead guitar.The things started to steam up for the band 'cause the critics were great,and
the band took part of the festivals,and clubs around Europe.2008.Sammy left the band,and Axel Praefcke took on the lead guitar. With him, MQueen recorded new album, "Rock-a-Billy Heaven Bound" (Rhythm Bomb
Records).