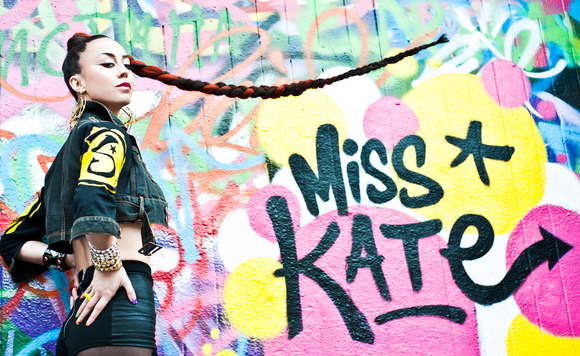 After the release of her debut single "You Come Back", Miss Kate joined forces with a new Irish Funk & Soul band whose members have played at festivals such as Electric Picnic, Oxegen, The Cork Jazz festival , Body and Soul as well as the MTV awards (Kula Shaker) and rocked shows with the likes of Roots Manuva, DJ Vadim, The Herbaliser, Grandmaster Flash, Kid Koala, The Scratch Perverts, Dj Food, Amp Fiddler, Moonstarr & Roy Ayers.

They released an EP in November called "Miss Kate and the Higher State" which got to no 3 in the Irish Soul Charts and have packed many dancefloors this year!
Miss Kate is currently working on a solo album to be released later this year.

Dubliner, Miss Kate (aka Kate Stanley-Brennan) was hosting parties in after-hours clubs in New York when, inspired by all the soulful house music that surrounded her, she started writing and singing her own house lyrics.

The stage has always been in Kate's blood, not only is she an incredible singer but she is a highly accomplished actress in her own right. She has appeared in Raw, Fair City, The Tudors and various stage plays, most recently Kate has been on stage at The Abbey Theatre in "The Risen People"

Kate’s music is largely influenced by Soul, Jazz, Funk, Blues and Hip Hop…and of course House lingers there somewhere! Inspirations of hers range from Muddy Waters, Leadbelly and Jimi Hendrix to Aretha Franklin, Chaka Khan and Erykah Badu to name a few.

" an intelligent, sophisticated piece of music taking elements of pop and mixing it up with contemporary urban beats and a dash of blues."- nessymon.com

"the EP is very enjoyable and interesting. The band are doing something innovative and unique, a solid debut indeed..."

"...Songs like Took The Life have that edge that really shows off the originality of this artist,"
-Goldenplec, Irish Album Reviews, by Orla Conway

"I went to see Miss Kate play in The Crane Lane — she is unique in her styling and vocal ability. Attributing her style to New York.....Miss Kate is one major rising star " - West Cork People: Kate Brennan-Harding

" it would seem destiny has a lot in store for this multi-talented performer. With high-profile managers in London and LA, her career is set to go global."- IRISH EXAMINER

"a music force to be reckoned with..."- IMAGE

"New singing sensation Miss Kate (aka Kate Stanley-Brennan) launches her new EP today at a special event in Dublin’s Madison club on Wicklow Street and it promises to be a good one." -RSVP

" music from Miss Kate and the Higher State ,continuing what seems to be a growing trend in the city for live funk and soul bands"- TOTALY DUBLIN