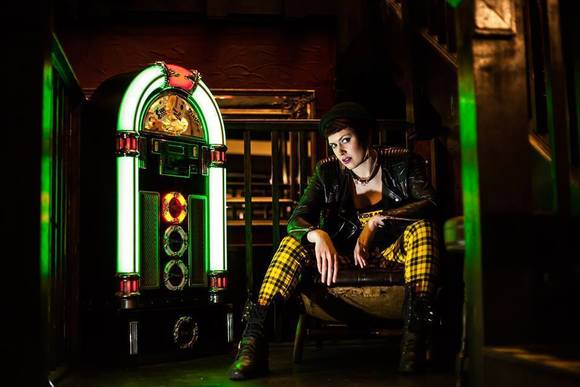 Millie Manders is an off the wall, off the chart, ballsy singer-songwriter from South London bringing a party-hard mix of ska, pop and punk-rock to the stage.

Millie started her musical journey at just five years old, experimenting with the piano, and going on to pass grade five on the clarinet at 11, adding alto and soprano saxophone to her repertoire until at 16 she chose her voice as her main instrument and received vocal coaching from Richard Charlton (Ed Sheeran, Jason Perry, Leanne Mitchell).

Since this time Millie has been in various bands, developing her vocal and song writing skills in new ways and emerging as a solo singer-songwriter in 2012.

Millie’s music is clearly eclectic and this is a fact she happily celebrates.
“I like to think my music is full of energy and dexterity – a colourful clash of genres incorporating everything from rock and soul to ska and folk. I draw inspiration from many different artists; James Brown, Aretha Franklin, Skunk Anansie, Pink, The Who, Rolling Stones, The Specials and The Ramones being a few of my favourites. I was brought up listening to classical, theatre, rock, rhythm and blues, hip hop and more because my parents are both music lovers so it all plays a part in the way I write.”

The last three years has seen Millie grow a substantial fan base across the UK, touring consistently and releasing two EP’s. Millie is constantly reaching out to her fan-base and her non-stop work ethic has cemented her reputation as a hardworking and recognisable force.

Millie’s work has been exploding in all directions – radio shows, magazines, new recordings, gigs all over the UK and her first show in Paris in November 2014 has opened doors for more EU dates to be announced later in the year.

Several online radio stations such as Shoreditch, Croydon, London Unsigned, Krystal and Blast Radio have interviewed her, featured her music and used her to co-host shows. BBC Norfolk featured her track ‘Raw’ on their show hosted by Sophie Little and more recently Millie was invited to ‘The Punk Show’ on Team Rock Radio to be interviewed by Matt Stocks and play a live acoustic set.

Online magazines have also taken a huge interest in her music, with Niji Magazine, The Punk Archive, Music Gateway and Get Mentioned all having written positive reviews on Millie’s latest EP. Niji Magazine have also interviewed and featured her in their publication on several occasions. They became the press sponsor for The Brought To You Tour in 2013 and follow Millie as ‘one to watch’.

2014 saw Millie playing at several festivals across the UK including BoomTown with The Snare, Upton Fab Festival in Worcester, Rhondda Rocks in Wales, the Greater Manchester Fringe Festival, Angel Fest and Two Counties Festival in Kent as well as K-Fest in Lowestoft. She also performed alongside Leo Ihenacho, Lemar and Jahmene Douglas at London Rocks, and has been asked back to sing again at this year’s event.

Since then Millie has played Scroobius Pip’s club night ‘We.Are.Lizards” at Proud in Camden, “Matt Horne Presents” with Bloc Party at The Queen Of Hoxton and was personally asked to support Bleach Blood (Jamie Jazz – King Blues) at their Christmas show in Camden at the end of 2014.

2015 has already been big from Millie – having smashed her Pledge Music campaign with more than a week to go and playing large festivals such as The Great Escape, Tramlines and Kaya, as well as some of the well respected smaller festivals such as Blackthorn and Greater Manchester Fringe.

Her quirky ska pop punk music has attracted the likes of Horace Panter and Lynval Golding of The Specials, Itch and Jamie Jazz from The King Blues, John Kennedy Xfm and Matt Stocks from Team Rock/Metal Hammer, with Horace going as far as calling her “The New Girl On The Block” regularly on Twitter.

With her next EP set to be released in November and another UK tour planned in the run up, big things are heading Millie’s way.

“I love it. REFRESHING. What a way to start my day” – Lynval Golding, The Specials

“If you see her name on gig flyers around the UK, go and check her out … She’s a great artist, and one to watch” – Matt Stocks, “The Punk Show” Team Rock Radio / Metal Hammer / Classic Rock

“This girl’s really got something going for her. Be sure to see her everywhere in the not-too-distant future” – Get Mentioned

Her attention to detail is phenomenal, her stage presence electric – If you haven’t listened to her yet, you need to.