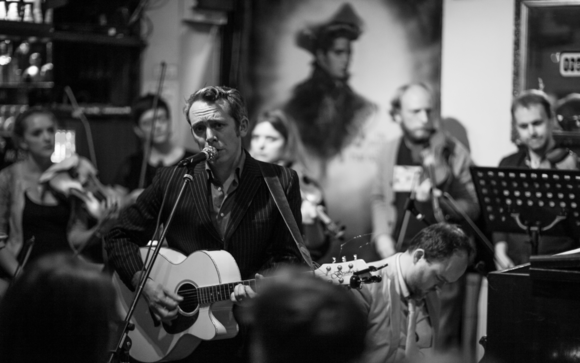 Mikey Georgeson is a painter and singer song-writer.

The Sunday Times described his band David Devant & His Spirit Wife as the "future of rock and roll". Reviews for his new album 'Blood & Brambles' have been equally fulsome in their praise...

"pop album of the year thus far" the Quietus
"impish genius for melody" The Guardian
"totally enamoured and hooked on its melodic sweetness" - Monolith Cocktail
"Wonderful knock out English pop gems" - Pop Junkie
"Gorgeous, gorgeous horns blasting out like thick, treacly, sexy custard all over the aforementioned blackberries. That's right, sexy custard. Deal with it...'- Listen with Monger
"Another supreme pop nugget, and a damn sight less melancholic than Richard Hawley. – an indie folk epic" - One Good thing Each Day

'﻿‘till it’s over’ – blimey what can I say – quite possibly the most perfect thing on planet pop right now and something that ought to be tuned into immediately by all those of you who’ve lain awake at night imagining Divine Comedy rummaging through a Bacharach and David sonic cook book channelling Anthony Newley and Tony Christie, an outsider brat pack carousel dreamt up by Jarvis Cocker swirled in cabaret, big stage, big band, lush symphonic noir sophistication all drizzled in a glitzy easy pop 60’s classicism.' - God Is In The TV

'Georgeson is a natural story teller and crooner which is a rarity these days but the added indie swagger and charm really sets this apart from the crowd. Bravo, sir, bravo.' - Listen With Monger

'Crafted to perfection as always, waltzing to a happy-go-lucky European romanticised etched Billy Childish backdrop, Till It’s Over is as charismatic as you’d expect and enjoyable as you’d expect.' - Monolith Cocktail

Mikey Georgeson is a painter, illustrator and singer/songwriter currently performing as Mikey Georgeson & The Civilised Scene recording for the London pop-Z label.

As "the Vessel", he is songwriter and singer of the cult art-rock band, David Devant and his Spirit Wife.

He is a largely unknown and undiscovered pop genius.