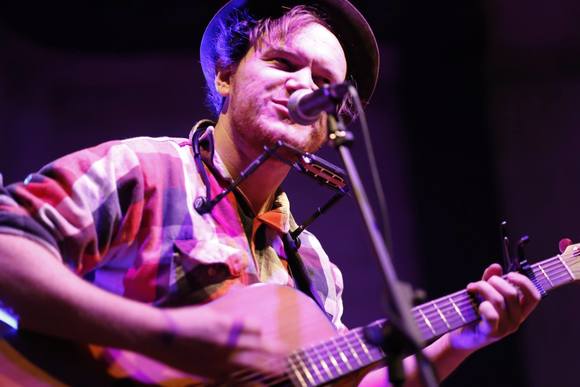 Description: Guitar and harmonica wielding troubadour from Australia, Michael Brinkworth, with a backpack full of heartfelt road-worn songs written throughout his wanderings around the world, has honed a unique songwriting and performing style blending folk, blues, indie and alternative-country with rocknroll soul.

Since moving to Berlin in 2013, he established the songwriting folk duo, The Red Town Blues, the alt-country-rock quartet WreckHeads, and more recently, the Michael Brinkworth Trio. Although he continues to collaborate with other musicians on various projects, he still loves the freedom of performing solo and taking his audiences on a journey as a singer-songwriter, making each concert a new and unique experience.

Bio:
After spending his teens/early twenties playing guitar in various short-lived indie bands, he began playing music on the streets of Brisbane at the West End farmers market and (in what turned out to be a 'baptism by fire') amongst the revellers in Fortitude Valley´s party precinct on the weekends. Firstly, as a guitarist alongside another singer-songwriter friend and housemate, they played the music they loved, from old blues and roots traditionals, to Dylan, Young, Waits, Reed, The Band, Rolling Stones and more recently, Wilco, Ryan Adams, My Morning Jacket, Elliot Smith, and through this he eventually found his own songwriting voice, starting to write, sing and play his own songs. Upon finishing university, he accrued more street-performing and concert experience on his seemingly endless hitch-hiking adventures, firstly around Australia, from Brisbane to Byron Bay to Sydney to Melbourne to Alice Springs to Fremantle to Broome and in between, then across the USA, Canada, Mexico and Central America, eventually all over Europe, and finally ending up in Berlin, which has since become his home base. After putting out several live releases and EPs, establishing himself amongst the Berlin indie-folk scene, playing shows in Europe and the USA over the last 2 years, his highly anticipated debut studio album with full-band arrangements is set for release in September 2016, to be followed by a European/Australian tour.