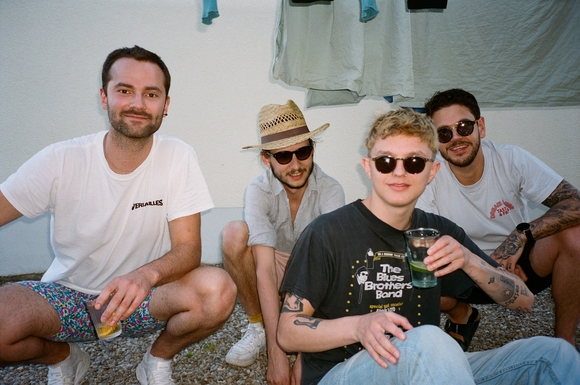 Sponsored Post Nice and slow, but in a convertible.

Short-haul flights, credit cards, convertibles, rosé and new streaming series - that's what the songs on the debut album by songs on MESSINA's debut album. This superficial garment adorns big questions: What is important to me and why? is important to me and why? Can I change wrong behaviour while taking care of myself? The album title SPONSORED POST shows with a wink of the eye that the band from Winterthur is here is advertising here. For themselves and for dealing with the decisions of our time. On the singles A M E X feat. IKAN HYU, BARCELONA and SEASON 3 and in the accompanying videos MESSINA explore the defiant, lost-in-thought fun as a reaction to the far too big questions of our time. of our time. This only works for a short time - with too much reflection escapism quickly leads to incomprehension towards oneself. Another substantial part of the album therefore revolves around CAPRI SONG, FLIGHT IN 45', TIRED STILL and OPTION A. Real answers, however, can only be found in the end. answers can only be found in the orientation of personal relationships, for which one is actively as in the songs ICED LILAC, ROSÉ WINE and BANKING APP. The production of the album by Philipp Harrison is modern and contemporary, almost always over-the-top and therefore so fitting for this music. and therefore so fitting for this music. The songs deal with weariness and disorientation, so they get they get synth layer after synth layer and bass drums that kick in the gut. So Raphael Weidmann (vocals), Gian Rosen (drums), Nicola Philipp (synthesizer) and Jonathan Labusch (guitar) present a versatile and cohesive first album, which nevertheless that doesn't take itself too seriously and can always be fun to listen to. With senseless hedonistic verses and catchy choruses. Inspired by Bilderbuch and the Foals. Live, too, MESSINA presents itself as a colourful firework. After numerous concerts in Switzerland (Winterthurer Musikfestwochen, Radar Festival, Mehrspur Zürich, among others), the band is taking SPONSORED POST, the band takes on foreign countries. Impressive and energetic shows are delivered, electronically enriched shows by a band that knows how to get its audience dancing. dance.

The artwork of the album is dominated by the racing driver on the cover. For each song, the band has Invented a brand and a product for each song, as a sponsor in the fictional motorsport world of the protagonist. This This world can be experienced actively: in a MESSINA mobile phone game that is released with the album. The concept car from the game can be admired in high resolution in the press kit. Artwork for every song In addition, each track is accompanied by visual works by young Swiss artists: Paintings, sculptures, installations and much more have been created. Each song is accompanied by its own colourful world opens up for each song. The works will be on display from 10 to 19 December in the Oxyd art space in Winterthur. Winterthur.