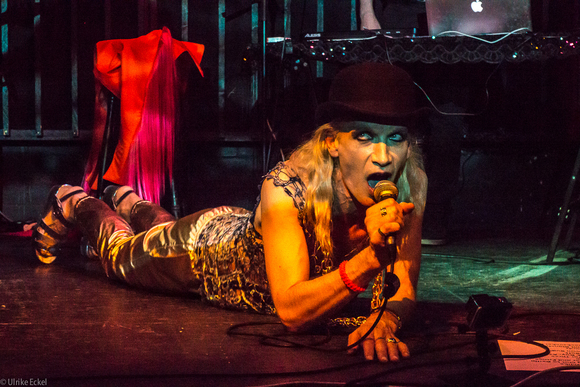 Merlin Dietrich is a songwriter and performer.

The persona was launched in 2012 in a conceptual performance series called Tea with Merlin Dietrich given in Berlin, Neukölln. The artist was born in London and is now based in Berlin.

His public debut was at the Queerovision Song Contest in Berlin in 2012. From then on, the artist started work in his first album, Tea with Merlin Dietrich, releasing his first single, Forests of England, in March 2014, with a video clip directed by Markus Rock. Merlin’s second single, Silver Samovar, was released in July 2014, accompanied by a much- loved video by Frank Bertram from Wunderwerk Berlin. The whole album came out in November that year and was accompanied by a new video for the song Sad, Sad Song, directed by Ceven Knowles.

In 2015 Merlin Dietrich started working in a new album, Doppelgaenger. The first single Flying out to Berlin, a hymn to the city, won the Jury Prize at the Berlin Song Contest. This punkrock-disco anthem was subsequently released as a single. A great video clip directed by Wrench and Franks was released on April 6th 2016.

On Friday 25th November the artist will present the Doppelgaenger Album in a release gig that will take place in Hangar 49 Club, in Holzmarktstraße 15-18, 10179 Berlin. The release party starts at 20.30h, Merlin is playing at 22.30h.