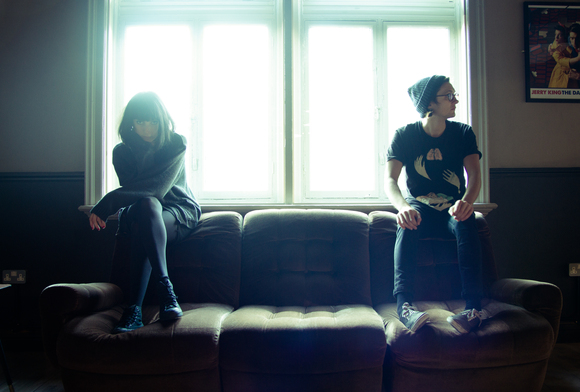 Formed by Ryan an Liza over a summer of endless bleary-eyed bouts of insomnia, Menace Beach captured the zero attention span and spontaneous, weird-out nature of a couple of minds totally zoned-in to a fuzz pedal and a cassette recorder in the dead of night.

After several un-treated breakdowns and a subsequent rash decision to relocate to Leeds, Ryan and Liza managed to shack up with MJ (Hookworms) and re-imagine their crackly 8-track demos. Joining them on the session, were Nestor Matthews (Sky Larkin) Matt Spalding, and Robert Lee (Pulled Apart By Horses) who fought their way through Liza’s rats nest of cables and home-made synth modules to blast through the songs during another all-nighters as MJ’s suburban homes studio. The sessions proved so much fun in that they all decided to stick around.

“If, lyrically, the first load of songs we did were a document of losing it again, being ill, moving cities, and all that comes with that, then I guess the songs on Lowtalker are about the aftermath of that; getting better, making friends and trying to reconnect mentally and spiritually. I feel like there’s a lot of positivity on there”.

Menace beach are currently recording their debut album, due for release late this year.