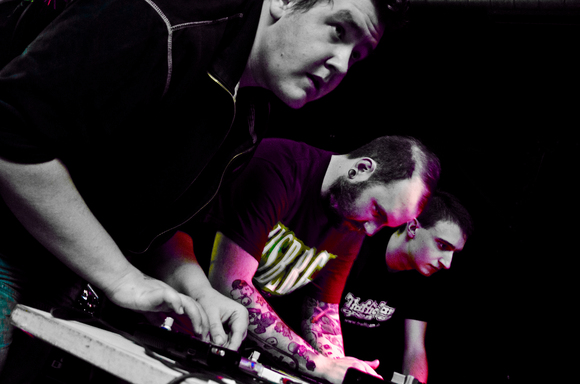 We use Gamboys to create electronic music - mostly techno and similar danceable stuff, but also Dubstep, DnB or Industrial.

Info for promoters:
On the stage we need a table (ca. 2 m²). We bring our own mixer with a stereo chinch output (red & white cable). If you provide a projector and a canvas, we will also make live visualizations for our concert - please let us know in advance. We will also bring merchandise (t-shirts and albums), please give us a chance to sell them.

Melted Moon started as a one-man-project in 2006 by Mathias, until, in 2012, Stefan joined Mathias. Still having only mediocre success, Melted Moon managed to be well known in their home town of Aschaffenburg, Germany, and released an EP called "Little Sound", completely produced by the two members on their own.
During 2012, they were accompanied by the film maker Fabian, who made a video for the band and, as he also was skilled in music production, he joined the now three-headed team in early 2013.
From that point, Melted Moon started to become one of the most active and successful Chiptune bands in Germany. With gigs on large events like the Schlossgrabenfest in Darmstadt, the Traffic Jam Open Air in Dieburg or on the Gamescom in Cologne (Nintendo and Roccat stages and the retro stage), they managed to get in contact with a record label (kompuphonik) which produced their first album, Meltdown.
Melted Moon's fans mainly come from Germany and is well known in the international chiptune scene, but they try to bring chiptune closer to the general public - by playing on events that are mostly visited by "normal" people who often have never heard real danceable music coming from Gameboys.

As for the technical facts, Melted Moon uses only original Nintendo Gameboys that are modified for music production, using cartridges with the LSDJ software, accompanied by a MIDI-synced Korg EMX and filtered through a KaossPad.