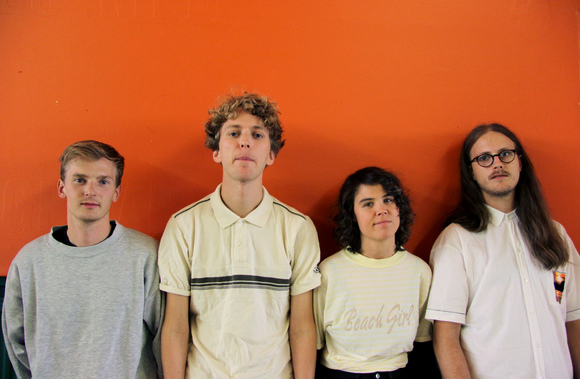 The 2017 debut EP received praise from both Swedish and international sources such as Amazing Radio, Ja Ja Ja and Line of Best Fit, making Melby one of the most exciting names on the Swedish indie scene. The band returned with Reject and Overthinking last year, a year which then saw tour dates in London and Berlin, as well as all over Sweden. Debut album None of this makes me worry is yet another piece to the exciting puzzle that is Melby's music and another step in what is forming to be one very promising career. The album is out April 12th on all digital platforms and limited vinyl via Stockholm label Rama Lama Records (ROW) and Sinnbus (Germany/Switzerland/Austria).

The band often gets comparison to fellow swedes Dungen and Amason but Melby’s dynamic sound, with influences from folk, psych, indie and pop, stand out. The quartets light, semi-psychedelic folk pop is led by Matilda Wiezell’s enchanting voice which fits perfectly with Melby’s unique musical landscape - a sound that's been called "otherworldly, and wholly brilliant" by The Line of Best Fit. The band consists of Wiezell, Are Engen Steinsholm (back-up vocals, guitar), David Jehrlander (bass) and Teo Jernkvist (drums) and formed while living together in a Stockholm shared housing.

None of this makes me worry catches all of Melbys many qualities in a way that truly represents the bands musical expressions. Beautifully intertwined song and guitar melodies are often in focus and ranges between catchy pop to emotional melancholy. From childish, playful opener VCR to the closing dynamic live favourite Stalker there is a common theme, even if the inspiration comes from a wide variety of directions.

The band about None of this makes me worry:

“Our debut album None of this makes me worry is closer to our live sound than our earlier releases. While recording it, we worked faster and more focused than before. Even though we have added some extra glitter to the songs, we stayed loyal to their core and how we normally play them. In contrast, we spent about a year on and off in the studio when recording our last EP, and those songs changed a lot in the process. It feels great that the album turned out like this. Our sound has gradually developed during the three years we have played together, and the album reflects this more clearly than our earlier tracks.

We have tried to really delve into the different moods of each song, to push them as far as we could in their own directions. Like, not really thinking about the album as a whole while working with the individual songs. Just arranging, playing and mixing to max out the original moods of the songs. We tried to make VCR both trippy and childlike, and Marina kind of mature and polished, and as much lazy country as we could manage without getting an identity crisis. Reject is our attempt at straightforward dreamy indie pop, and Stalker is kind of bluesy, with both raw and desperate elements to it. We spent quite some time finding the right order of the tracks to make the album come together musically, yet still being a bit surprising at times.”

None of this makes me worry, including singles Reject, Overthinking, VCR and Dancer is set to be released April 12th on all platforms and limited vinyl via Stockholm label Rama Lama Records (Steve Buscemi's Dreamy Eyes, Kluster, Chez Ali etc.) and Sinnbus in Germany, Switzerland and Austria.