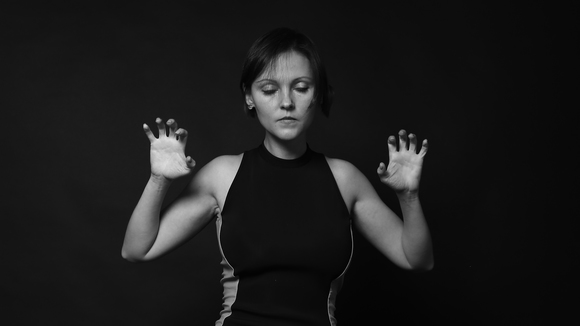 The band was formed in 2013 by a theater actress Iryna Lazer (maiden surname Skrypnykova) (lead-singer, composer, performer) and Oleksiy Mikriukov (composer).
Collaborating exclusively on-line they debuted with the mini-album “Ivana Kupala Night” in 2014. The full-length “Day and Night” album was released a year later in 2015.
Since 2015 Iryna Lazer began performing live using loop-station, vocal pedals and synthesizers creating polyphonic compositions in Ukrainian and her own invented 'Mermaid' language. The same year a composer and music supervisor Taras Lazer joined the group and the band's name evolved to Mavka.
In 2016 Mavka appeared on a number of festivals including GogolFest and The Day of Street Music. The band also played at Hi5 studio and performed for the plays in Zoloti Vorota Theater.
In 2017 members of Mavka wrote soundtrack and acted in the movie “The Tale of Money”. Later the band released music video of the official soundtrack ‘Night Shadow”. The same year Iryna Lazer collaborated with the band “Ocheretianyi Kit” and recorded vocals for the album “Naliagay na vesla”.
In 2018 the band started collaborating with the сhildren's сhoir Dyvo (conductor Tetiana Nadolinska). The band and the choir produced ethnic-electronica compositions and some interpretations of the Ukrainian folk songs. Together they gave the concert “Horovod under the stars” on May 27 on the stage of Kyiv Planetarium.
In 2018 band's leader Iryna Lazer recorded vocals for the vinyl LP album “Femininho” by King Imagine.
On December 25, 2018, the band presented an exclusive Christmas concert "Carols live looping" in the cultural center Master Class. The main idea of the concert was for the vocalist to create and perform live the polyphonic carols by herself using only the loop pedal.
In 2019 the band created an original version of the song 'Hej Sokoly' for a documentary movie 'The Borderline. Hrubieszów operation'.
In June 2019 the band started collaborating with the German dancer Véronique Langlott and created music for her choreography research Folkstrance.
In 2020 the band recorded a number of songs for the movie "Deportation 44-46".
The band's music is used as a background in plays 'Sasha, throw out the trash' of the Kiev Academic Young Theatre, "The People Are Singing" of the Royal Exchange Theatre, "Home" of the Kyiv Academic Theatre on Left Bank of the Dnipro river.

Soundtracks and music for movies and plays:
2017 – music and soundtracks for “The Tale of Money” feature film
2017 – soundtrack for the play “The People Are Singing” of the Royal Exchange Theatre in Manchester
2018 – music for the play “Sasha, throw out the trash” of the Kyiv Academic Young Theatre
2019 – soundtrack for “The Borderline. Hrubieszów operation” documentary film
2020 – songs for “Deportation 44-46” documentary film
2020 – music for the play “Dim” of the Kyiv Academic Theatre of Drama and Comedy on the left bank of Dnipro

Mavka is a Ukrainian mythological female long-haired figure that is believed to live in forests, lakes or rivers that appear only on special holidays during the year. They entice or seduce young men to later tickle their victims to death.