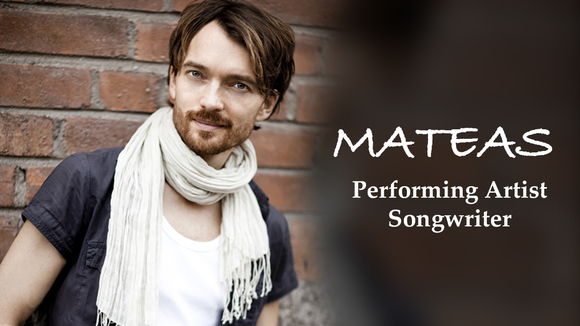 Performing Artist & Songwriter Mateas is a professionally trained singer, musician and musical theater artist from Stockholm, Sweden who has done over 700 performances – as a solo artist, singer in bands and vocal groups, and as a singer/actor in musical theater productions.

He started his career in New York, but the longer Mateas stayed in the US the more he realized how much he loved Sweden and his hometown Stockholm. So, after having witnessed the horrific terror attack of The World Trade Center in 2001 Mateas moved back home.

After a few years of demo recordings he finally released the EP "Come alive". But due to a tough separation and weak responses from music labels/publishers he lost his ambition to keep writing and performing his own music and focused on music theatre instead. Until one day when something very unexpected happened -
2 days before his biggest performance ever so far - the Nobel Prize Banquet with RJK - Mateas ended up in hospital with a brain stroke. After 36 hours at the hospital with all kinds of medical tests, Mateas was miraculously signed out from the hospital, and he stubbornly made it back to the dressed rehearsals at the Stockholm City Hall just in time.

A few days later the words ”Don’t die with the music still in you” by Wayne Dyer whispered in his ear. Mateas then made a firm decision - no matter how successful or unsuccessful his music career will be, he would keep writing and performing his own songs. That commitment finally resulted in his first soloalbum Mask off, which is co-produced with Lars Winnerbäcks original piano player, Jens Back.   -Great music performed well can not only entertain, but also move, touch, inspire, delight and empower people – that’s my ambition, that’s my call…