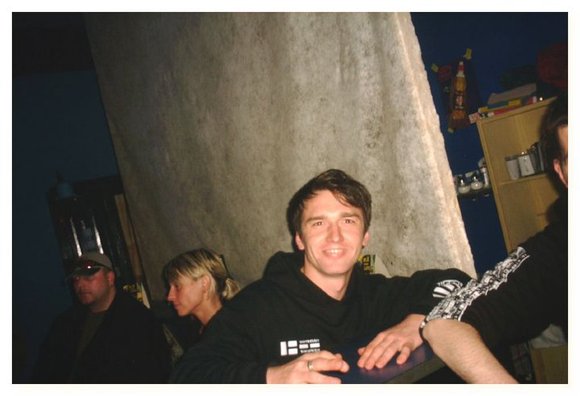 Looking for a NOt PC based PA?

1994 my first contact to electronic producing were made by me as my cousin rolf showed me on his 368sx-15 a programm called whacker tracker, a 4-line audiosequenzer playing mof-files and a lot of cool features. soon i explored fasttracker that had a sampleeditor and 32 lines and i started to remix and programmed hardcoresong up to 15min length. u've to remember that anny command had to be written in hexadecimal numbers and there were audioeffects included. so i had to trick a lot. i also started dj'ing and bought a lot of records. 1995 i jobed a lot to buy analogue hardware equipment. soon i had my first live gig for a payment of 3 hawai-sandwiches and a bottle of cherryjuice. from this time on i'm playing live. 1998 "the tesla ep" in a limited edition of 200 pieces 12" picturedisc mas made completely by ourselfs. it's sound is describeable a rough as the times were. very direct and analouge. the cd analog experience followed. by this time i quitted dj'ing, cause there were too much out there and i wanted to produce and play live for myself. 1999 i started to work as a free member at the independent magazine heftig. 2000 the eap 02 "holidays en mechico" followed. it was a 12"picturedirc limited to 202 pieces and was again made completely by ourselfs. a homage honouring the last analogue monsters that should be wiped out by cpu's.u-last waren. 2001 i made my practise in the d.a.v.e. gmbh in berlin at the brunnenstrasse. since this time i'm a switcher.. =) and it took a profound process place. i changed my mind from simply analogue sounds to more open combinations of both kinds for generating music. at dave i became acquainted with ulf kaiser from ableton who showed my an early beta of version 1. as a mpc3k user i was fascinated using it up to today. i also got to know aem.aze a very close friend of mine. he managed my first gig at k2 (k--) at former airport preschen, perhaps the most independent project in eastern germany. 2003 pyridin, a cd made with a mpc3k and a lot of difizil things and effectcontrolers. the max of equipment has been reached. 2004 the year starts with greats gig as Jiggy Beaty 1 under euripes largest coalbagger the f60, a radio transmission at mdr/sputnik and so on 2005 anny place u look at became more poor. i made a lot of hardcore- and tribetekkgigs cooperating with format c:.. from xy-constructions and pursuer from cib. i also finished my studies in electronics at fraunhofer institute of mediatechnology at ilmenau