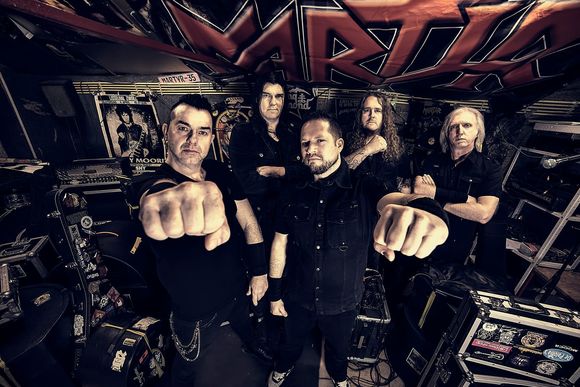 During the five years that Martyr was alive and kicking (1982‐1987) the band released two albums that are considered cult in the metal scene today.

‘For The Universe’ (1985) and ‘Darkness At Time’s Edge’ (1986) are classic metal, a delight for those who love strong mel-odies, speedy riffs and a high level of technicality.
In those years Martyr appeared on compilation albums from Roadrunner and Metal Blade, was voted Holland’s best new metal band in Aardschok magazine, has toured with several international acts and appeared on Sky Channel’s Monsters Of Rock.

Martyr disbanded in 1987 but reunited in 2001 to play the Heavy Metal Maniacs festival. Four years later the band revived almost the complete 1982 line up to play the Headbangers Open Air and Keep It True festivals. The flame started burning again and the band have con-tinued to play live ever since. December 2008 MARTYR supported US Shock Rockers Lizzy Borden on their European tour. In 2009 and 2010 MARTYR hit the European stages sup-porting great acts like Flotsam & Jetsam , Vicious Rumors, Jaguar, Evergrey.
In 2009 the first new Martyr record in almost 25 years was released. That’s when the new EP ‘Fear’ was coupled with a re‐release of the classic ‘For The Universe’ album as a double digipack entitled ‘Fear The Universe’ on Rusty Cage Records (RCR0017).

In 2010 and 2011 Martyr re‐entered the studio between the live shows, working on the successor for ‘Fear’.
A complete new album entitled “Circle Of 8” was released by Metal Blade Records in November 2011 world‐ wide and has proven to be a significant impulse in Martyr’s revival after it’s release. With 30 years of MARTYR (with a big celebration in their home town Utrecht – Tivoli) and 30 years of Dutch Steel signed with Metal Blade again : “The Clan Is Back Home and stronger than ever…..”
And the band proves it again in 2015 and 2016 with new national and international tours and with the new and heavy album ‘You Are Next” released by Into The Limelight Records in cooperation with Pure Steel Promotions and Soulfood distribution to be unstoppable.

More headline shows , festivals and support tours followed where the always hard working band coquered a bigger audience. Especially noticed also in Japan, where MARTYR toured Sept - Oct 2017. This resulted in a special release on Edge Trax Records and a tour in the land of the Rising Sun. In 2017 MARTYR continues promoting "You Are Next" , celebrating it's 35 years anniversary headlining the Heavy Metal Maniacs Festival. Also the band participated in special projects like the “ANA - Metal for Charity” project and “Breaking The Chains.”

In 2018 the band shows to be unstoppable. With a new line-up and tours through the Netherlands, Belgium , Poland and Germany at hand and a 2nd and 3rd tour in Japan in February 2019 and February 2020, while meanwhle the band signed a new record deal with Pt78 records for 2 albums !
A Live In Japan album is released May 31 2019 which captures the MARTYR eXperience at it’s finest. This release also resulted in an official Japanese release at Rock Stakk Records Japan and a double white vinyl release January 2020 on both labels.

A complete new album is to be expected late 2021 for which MARTYR is currently writing new material.
The band decided to release 3 songs before this album release with great succes : the epic power metal ballad “No Time For Goodbyes” ,the pounding metal track “Fire Of rebellions” and the metal hymn “Raise Your Horns, Unite” .

Please join us in the MARTYR eXperience !

For info and bookings contact MARTYR at:
Wayland Management : info@wayland-management.nl or info@martyronline.nl