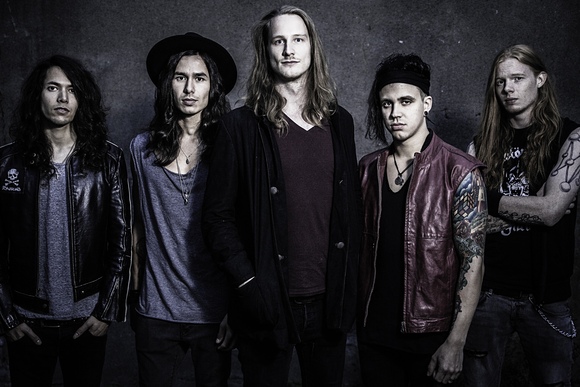 Mandrake’s Monster are an Enschede, Netherlands based five-piece, inspired by the likes of Queens of the Stone Age, Foo Fighters, Black Sabbath and Led Zeppelin.

Their raucous and fun stage persona reflects on record: bringing solid and epic rock to the forefront at every turn. Having supported Red and Biohazard on tour already, you can expect to catch them on a stage near you soon.

“I rarely meet bands that blow away the dust from my eardrums. Mandrake’s Monster belong to this small group of bands: tight, powerful and overwhelming,” Rinze van der Wal, cub owner of Atak

Mandrake’s Monster are chomping at the bit; cymbals ready for action and guitars pointed towards the sky; leaving a trail of blatant talent in their wake. Thanks to their riveting catalogue of alternative rock, the band has already made a name for themselves across parts of Europe. Now and with a self-titled debut album under their belt, their sights are firmly set on the limelight.

Inspired by the likes of Queens of the Stone Age, Foo Fighters, Black Sabbath and Led Zeppelin, together the five-piece create a raucous fuss of military beats, electric riffs and sturdy bass worthy of their Marvel inspired name. With a steady history of music-making already giving them flight, to say that they’re ready to charge at the music scene is an understatement.

Comprising guitarists Alex Freise and Peter Muller, bassist Sem Christoffel, drummer Mart Nijen Es and vocalist Martin Duve; Mandrake’s Monster are based in Enschede, the Netherlands, having met and formed at University in early 2012. Their love affair with cutting hard rock and blistering alternative music started earlier on, however.

“My father played in a rock band when I was a small kid,” explains vocalist Duve. “We had the rehearsal room in our basement. My Mom was and still is a music teacher. Music has surrounded me my whole life.”

Similar tales of being fascinated by music from a young age litter the band’s résumé. Muller recalls: “I found out my Dad had an acoustic guitar. I’m actually left-handed, but just started playing a right-handed guitar. I had no idea what I was doing, but I did know that I liked it!”

Finally, falling for Californian band Incubus led the guitarist to the heady world of rock music, an experience that he claims changed his life. It also helped to kick down the door for artists such as Jimi Hendrix and Black Rebel Motorcycle Club.

However it wasn’t until early 2012 that these five best friends first recognised their shared love of alternative rock, leading them to form Mandrake’s Monster without a moment’s hesitation. After touring together for the very first time, they decided to put all of their energy into the band. In a further act of dedication, they even cohabit in order to focus squarely on their music.

Their time has been well spent. Regularly taking to the road together, Monster’s Mandrake have toured their boisterous concoction of rock and blues through their native Netherlands, Germany, Poland and the Czech Republic to amazing effect. The results speak for themselves, with fans scattered across the continent.

“Our band mobile ‘Ollie’ is the Keith Richards amongst cars,” they admit. “It’s a miracle the thing is still alive, after we’ve extensively lived and partied in it as much as we could so far. We always take it with us on the road.”

With the help of ‘Ollie’, Mandrake’s Monster have impressively already supported the likes of Nashville’s Red and New York’s Biohazard. They’ve also racked up acclaim from a particularly stunned bystander at their recently sold out Rock Café show:

“Last week I went to Prague’s Rock Café to have a beer, and was blown away by Mandrake’s Monster, a band from Holland who I’d never heard of! But you will definitely hear more from these young guys, because their songs are awesome, and their performance was ultra heavy, tight and flawless!” Bart Hennephof, from Dutch metal band Textures

Their energetic live shows stand testament to their excellent loud-quiet dynamic. Coupled with high-low operatics and their long rock inspired hair, they’re certainly an exciting prospect live. A typical Mandrake’s Monster show will see all five members of the band jump around on stage, echoing all of the late greats and invoking a typical display of debauchery and tank tops. Their unique approach to the stage is quickly gaining them ground amongst their peers and on their local scene. A Mandrake’s Monster show is a very special show indeed.

Somewhat cryptically, they claim: “As artists, we are building bridges from a dark, fast and bitter reality, into a beautiful, inviolable dream. Combining these two extremes makes us stay in balance - as musicians, but also as humans. On the other side, we love sharing emotions with everyone who joins us at our shows.”

Seeped in the kind of metaphorical and galvanising imagery that makes the rock scene so fun; Mandrake’s Monster wish to trigger the kinds of emotions stirred by their heroes, invoking a “stunning and warm feeling, full of energy that, at the same time, makes you shiver to your bones.”

They do this through love stories, “frustrating romances full of despair”, “fantastic stories and everyday life experiences” – topics anyone can relate to. It’s not all tears over cornflakes though; their often sarcastic view of things helps to make sense of the world, one blistering riff at a time.

This fusion of dark fantasy meets audible clarity often results in layer upon layer of guitar battering an incredibly intricate melody. Unsurprisingly, the band aim to create a night their fans will never forget. With this much talent on display, it’s sure to say they will realise their goal.