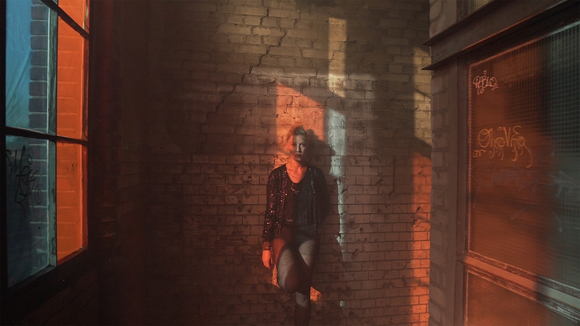 please find the current PRESS INFO and all relevant media links here: www.bit.ly/luluschmidt_en The first two single releases from Lulu Schmidt’s Debut-Album BiPopularity, "Happy And I Hate It", and "Fire", are already on continuous rotation on the Austrian radio station FM4.

The newcomer artist is also enjoying rotation in the UK, Lithuania, France, Germany, Switzerland, and Slovenia. "Fire" made it straight to Spotify ́s New Music Friday in Germany and Switzerland.

Lulu Schmidt has recently been described as one of the most exciting contemporary Austrian artists. She loves to play with roles, break them, and bring them to the stage as a "one woman show"; with a mixture of performance art, casual music, and a lot of talent. In her frequent public appearances, she plays every instrument herself. She is known for her shrill conceptual stagings, which focus on the themes of transformation and identity.

In the sensationally funny and scurrilous video for Fire (director: Rupert Höller), she lives out the joy of the eccentric. Body image, gender, and the “star cult” are deconstructed in an entertaining way: https://www.youtube.com/watch?v=JprO6HlLm1w

“Lulu (actually, Carola) Schmidt comes from the Austrian Waldviertel forest region, has studied art, has lived for a long time in Berlin, and is now working in Vienna on her debut album. Her artistic work is about transformation and identity; and also as a musician she doesn’t want to become settled in an established style. What Lulu Schmidt produces with violin, keyboard, laptop and voice’ can fit as easily in a club as it can in an art gallery - or on a pop stage. Stage props and performance play an important role in her appearances, so it’s no surprise that her performance at the Vienna Museum was one of the most striking at last year’s Popfest ” (Der Falter, Wien)

“One woman to rule it all - With her EP, Let Me Go, Lulu Schmidt anchors herself in the music scene, and shows that she is a fabulous musician in addition to a performer. Her entire presence and music is characterized by abstract electronica with charisma.”
(Mica - music Austria)
Link to artist portrait: musicaustria.at/one-woman-to-rule-it-all-lulu-schmidt-im-mica-portraet

“Lulu Schmidt (...) knows exactly what she is doing; she is a single-woman-orchestra with violin, keyboards, voice and self-produced beats. Her debut album is currently in production and is part of her project series "I Am Not Me, Please Believe Me", an artistic examination of transformation and identity. Several live recordings suggest that Lulu Schmidt’s artworks could also transform into a pop career.” (Popfest Vienna)

“An elf on crack, who rides through the night with her one-woman-orchestra of cacophonous pop-shredding and noise-beats.” (Das Werk - Vienna)


“At the tender age of three, in the cellar of her parents' forest home, she played the violin to dead animals - to free their souls. At five, she began playing the piano, and took her classmates from the kindergarten to the nursery to grace them with a secretly recorded radio show. Her live shows are now very well attended, and the audiences are happy and voluntary, and reacted enthusiastically on the 21st of April at the Electric Spring Festival in Vienna. Shortly before that, she was able to convince the jury of the Austrian music fund to receive a sponsorship. " (MediaBiz)

“She has something mystical, revealing - fragile, vulnerable, determined"


“Mystical melancholic, hypnotic, explosive, fragile and powerful; as a live act, Lulu Schmidt moves fairy-like through a world full of glitter, with electronica, violin, singing, and piano. She is often on tour with Tangowerk, at international festivals, or as host of events such as the Berlin Music Video Awards”. (The Muse, Vienna)

“In a festival lineup dominated by Electropop variations, the single-woman-orchestra Lulu Schmidt (singing, piano, violin, electronics), is not so conventional. She mixes electronic pop with classical and noise particles. Recently, her EP Let Me Go was released, and the album BiPopularity has been announced for the autumn.” (the Standard / Austria)

“The lady was also to be seen at the popfest last year, and she disturbed me a bit with her appearance. Okay, not just a bit, but even quite a lot. I refrained from writing about her, because I couldn’t find words for it.” (wienkonzert.com)

“Originally from Horn, Lulu Schmidt, with her "One Woman Orchestra" show, combines many styles into a new, unique overall concept. Whether she fascinates us with her violin, a la Lindsey Stirling, dips into artistic installation worlds, a la Florence Welch, or glides into the indie zone, or joins Berlin newcomers like Schlindwein (with whom she has contributed a track to "Fucking Berlin"), she cares for lascivious melancholy. There is much to be expected from her in every respect." (meinbezirk.at)

“...Lulu Schmidt is one of those insider tips: an excellent musician and performer, who has already dealt with the tricky task of catering for afternoon music enthusiasts at the last Popfest in the Vienna Museum." (Der Falter)