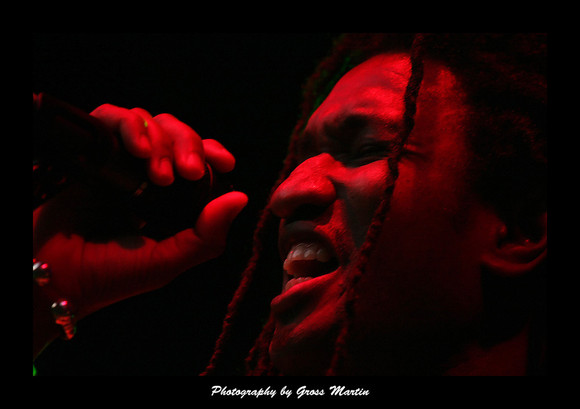 Born in Kaolack and raised in the suburb of Guiedewaye in Dakar Louis-Jean is an engaged senegalese Reggae musician.

His passion for reggae music was developed at an early age. With only 15 years he wrote the lyrics for a Youssou-Ndour-song on Children‘s Rights, winning the 2nd price of a unicef song contest. His love for Reggae sent him on a journey to explore south-africa, where he worked with the band of Lucky Dube, one of the most popular african Reggae stars.The result of this cooperation was the production of Louis-Jean‘s first album Dakar-Johannesburg-Berlin just before his departure to Berlin.
Inspired by Nelson Mandela‘s dream to bring the south-african people together as one Rainbow nation Louis-Jean founded his Berlin based band Irie Rainbow in 2004. With his musicians from different musical and cultural backgrounds he has been continuously developing their Roots-Reggae-Dub music style. Louis-Jean & Irie Rainbow create a new exciting musical experience by melting the inspirations of Jamaican Reggae and african Roots music and other international influences. Their common sources of inspiration are those couraged musical legends with strong and powerful lyrics and such as Fela Kuti, Peter Tosh, Max Adioa, Jimmy Hendrix, Lucky Dube, Toure Kunda, Youssou n‘dour. Driven by the idea of Reggae being a music that unifies different people and nations, Louis-Jean & Irie Rainbow have been cooperating and sharing stages with many national and international artists since their foundation.