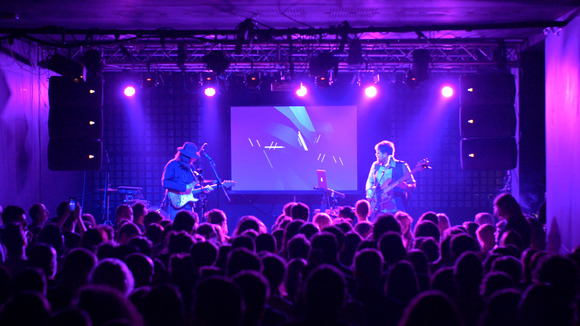 The band draws energy from sibling rivalry - the decades-long struggle for musical domination turned them into exceptional instrumentalists, their playing style breaking down the boundaries between genres.

Ljubičice made their claim to fame in 2019, when they stormed the charts with their new single, “Jedva čekam rat ljudi protiv mašina”. Their main focus has always been playing live, which lead them to a 30-odd concert tour, crowned by a performance at the main stage of the Exit Festival. The tour was a major success, as proven by ecstatic audiences across the region and punctuated by glowing reviews from the critics. The same year they entered the world of film by writing music for the “Žigosani u reketu” TV show, which gained popularity with regional audiences fast (IMDb rating 8,6).

In addition to live performances, the pair are pursuing careers as studio producers, collaborating with numerous regional stars such as Sajsi MC, Buč Kesidi, Daniel Kovač, LP Duo, as well as world-renowned legends like Bill Drummond. They are gear-brigands from the old flea market in Pancevo, who do not shy away from the forbidden things in music production.

The band is now evolving further as their new studio project, Ljubičice 2.0, grinds smooth sci-fi grooves, soulful electro-funk, and the theme of Man’s struggle against Machine into one cohesive, exciting whole.