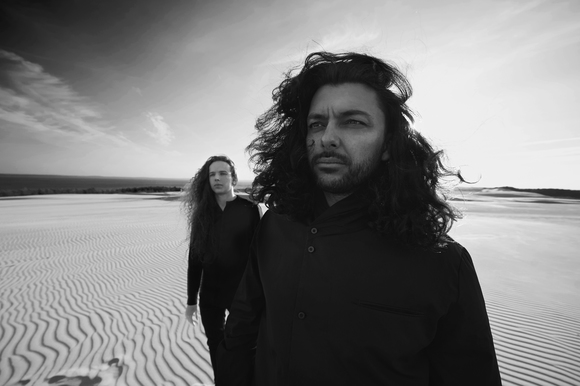 Listened to the music first, then started write first lyrics.

Learned a few guitar chords. This is how it started.
For Kamil Haidar music is a way to express himself – his joys and sorrows. Music has to hurt sometimes. As he says music is a kind of psychotherapy for him.
His first band was called Maqama. He met Mateusz Owczarek on his way there. They became friends. It appeared that they feel music the same way. They started experiment with mixing different kinds of music. It was just an adventure for them. Today this adventure is called Lion Shepherd.
The band has released two albums so far: “Hiraeth” (2015) i “Heat” (2017). All songs, lyrics as well as music, were written by Kamil Haidar.
„I want to leave some “mark of time” for people who will listen to it in 10, 20 or even more years. I treat lyrics as a notebook. I want my kids, when they grow up, to say after listening to these songs: “Wow! So that was the mood of 2016 .” – Kamil said in one of interviews.
Songs are for him a kind of diary. He never tells stories behind his lyrics. It’s just like destroying a good movie by revealing the ending to someone who has just bought the tickets. He wants them to be as universal as possible and to give an opportunity to the listeners to feel them in their own way.
There are a lot of oriental sounds in his music. Kamil spent most of his life in Poland but first years he lived in Libya and Syria where his father is from. This is why Arabic culture is very close to him. You can hear it especially on „Heat” album where the band added some interesting instruments to the mix, such as the Syrian oud lute, the Persian santur, and various Indian and Arabic percussion instruments.
Lion Shepherd always delivers more then you expect.