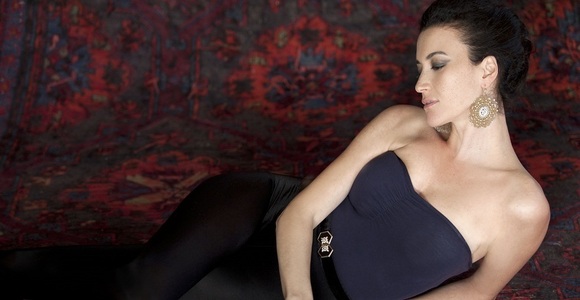 “Four musicians create a magical instrumental atmosphere of world music, but when Limor Oved steps on the stage, electricity pervades the air.

She has an hypnotic presence. She moves with intentional precision and controls every gesture…. In her singing and movement she seduces and persuades, surrenders and unravels, while extracting every possible shade of emotion; she is completely devoid of embarrassment, full of confidence, thriving”. “La’Isha” Magazine

Limor Oved was born in Israel to her Syrian origin father and her Libyan origin mother.
She began her music study in a young age.
During her Childhood and her adolescence age she loved to listen to popular music, especially Mediterranean music.
In 1989, at the age of 14, Limor began her study of classical music and classical singing. Later on, at the age of 19 she joined “Beit Zvi”, well known academy of theater arts in Israel.
In 1995 she was graduated and started working in the big theaters in Israel on leading roles in musicals such as:
Fantine – “Les Miserables”, Margarita – “Master and Margarita” (satin Moscow), Rosa- “Rembetiko”, Ms. Robbins- “Blood Brothers”, Yente- "Fiddler on the Roof ".
These roles have given her big exposure among the Israeli media.
After 10 years of acting, Limor decided to return to her first love, the music.
In 2005 she began her solo career and she was signed to a recording contract with “Nana disc” records company.
Limor sings mostly in Hebrew Spanish, Arabic and Greek.
Her songs are personal and deals with femininity, love, and are integrated with elements of Algerian and Greek ethnic music.
After seven years of hard working, Limor had released it on 2012 and gave the title “Limor Oved”.
Limor had performed with her band in Israel and received very good critics:
“…. Storming sexuality and a voice which “arise dead” – Tal Perry, Ma’ariv press.
“The show presents Limor as a Diva – ,” Mierav Yodilvic, Ynet.