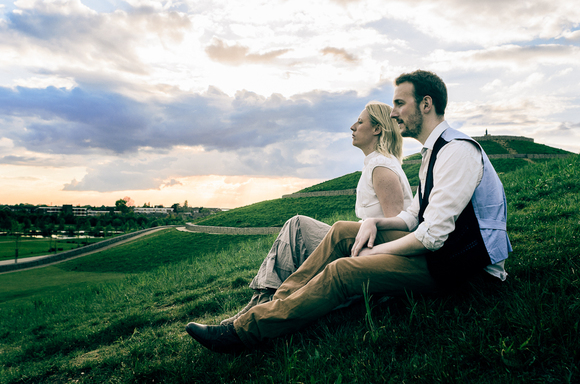 An eight piece "epic folk" band based in Bristol.

We've been described as an "emotional cannonball" by Tom Robinson of BBC 6Music.

Light Falls Forward are an acoustic folk outfit from Bristol, formed by Charlie Evans and Naomi Paget in 2011 after they met filming a music video for friends. They moved in together shortly afterwards and decided to try songwriting together. Their debut EP, Songs and Shadows, was released a few months afterwards in 2012 and they have since taken their music far and wide with two European tours last years and several UK gigs from small folk venues to a 10,000 strong crowd at a family festival in Essex. Their music is intimate yet powerful, haunting yet uplifting, described by Tom Robinson on BBC6 radio as an “emotional cannonball”. For Folks Sake said "stunning guitar picking, some surprising harmonies and... quirky piano syncopation, which just shows how good these guys can be."
They combine elements of Sharon van Etten, Laura Veirs, Feist and Daughter to create a sound that is organic and unique. Their new and third EP, Sleeptalking, encapsulates how much they and their music have grown over the past year with a fuller, more cinematic soundscape and reflective feel. Strings play a prominent part and their storytelling lyrics have a more powerful drive than previous EPs, from the anger of Green Eyed and defiance of What If, to the affirmation on Only When We Sleep... all coming to a beautiful close with the final lullaby track, Silent Conversations.