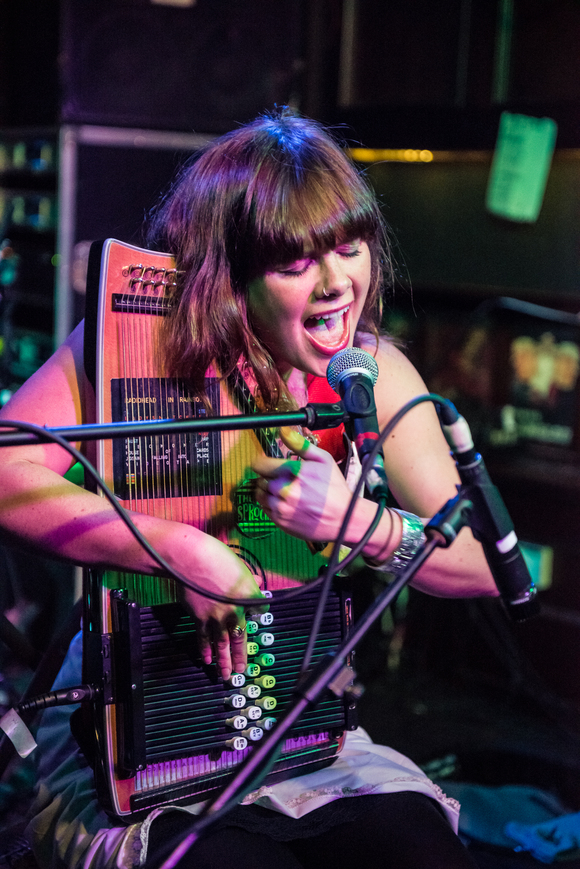 Also a member of electronic band OCHO, in the past year she has secured support slots with songwriters TORRES and Luke Sital Singh. Her songs seem to breathe melancholy, her live performances conveying a vunerablity of spirit and a raw honesty throughout. She communicates to her audience using the light and shade in her voice and the other worldly sounds created by the zither and autoharp. Her debut album is due for release in 2015.

MRU Best Trad/Alt/Folk Artist 2012, Laura Ann Brady's music is best described as dark ambient folk. Previously singer/keys/autoharp player in Lights Camera Sundown, and currently vocalist in Julyo and The Photosonic Orchestra. and a member of electronic band OCHO, She was also one of nine finalists in Spirit of Folk Festival competition in August 2013. Her songs seem to breathe melancholy, while her voice "sends shivers down the spine." Her pared-down live shows consist of only her voice,piano, zither and autoharp. 2013 saw her play support to Luke Sital Singh, TORRES and in January 2014 she supported Lindi Ortega in The Sugar Club.

“The Darkness” by contrast, and probably as expected, is a far more sombre affair. It even borders on the sinister occasionally with the lines “The darkness is coming in again,” and “It’s getting blacker still” really reflecting this. But don’t be fooled into thinking that it’s all doom and gloom as BRADY’s voice is something to make you feel uplifted. Her voice occasionally hits notes that send shivers down the spine, her line “I couldn’t sleep in my own bed” being one of the notable times. - Sean Noone - U&I Music Magazine
http://uandimusicagency.com/saucysundays-lauraannbrady/

"A very rich folk sound that has a true wisp rising out of it." Unsigned and Independent Music magazine February Issue

"There is a parting inside the lyrics that keeps it all steady as her voice hits all the right notes." Unsigned and Independent Magazine - Scene and Heard Review Febuary 2013 (see pic below)

"A new song.. Sunflowers comes across as bright and broody. The contrast in the two does lend it a powerful presence. In particular when it comes to the ornate aspects here, they combine to showcase something highly imaginative." Unsigned and Independent Magazine- Scene and Heard Review February 2013