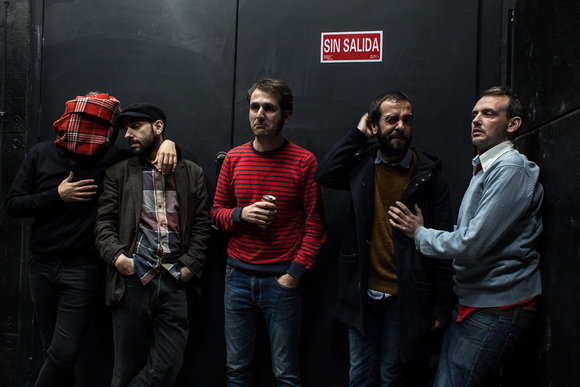 Las Víctimas Civiles were born in a former squatted barracks of the Guardia Civil, in Barceloneta, in 2003, during the massive protests against the Second Iraq War.

That building, one of the many usurped by the Miles de Viviendas collective throughout its history, housed (apart from actual major of the city, Ada Colau) several Valencian immigrants, including Marc Sempere and Pau Miquel Soler, members of the Jalea Real combat-rock group.

The arrival of the Valencian poet Héctor Arnau to the house also meant a communion in exile that provoked an improbable pact— in a no less probable future, Héctor, with his poems and Pau Miquel, with his rhythms, would give birth to an album whose name was already then 40 Years of Hits of Spanish Post-Francoism.

Many, many moons later, after several artistic attempts, Arnau, with several collections of poems published and staged, and Soler, with Arthur Caravan's experience as a leader, took up the old promise and allied themselves with their Caravanian companions Pau Aracil and Toni Blanes, and the trumpet player of the group Polonio, Ernest Aparici, to join a carnival punk-rock band that would combine the most playful musical desires with lyrical and/or humorous lyrics, always stark in the critics.

A few months behind the worst of the prophecies, and with the dictator's still long and heavy shadow over the political-social coexistence in the country, here are these hits of the country's post-Francoist regime that seek to instruct and make the most circumspect intellectuals and the popular classes dance at the same time.