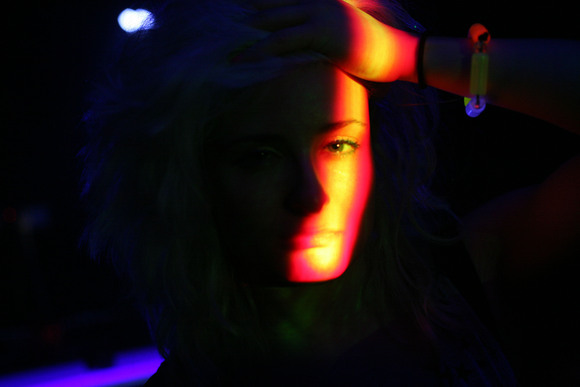 With hints of electro and industrial, guitar lines that recall altered Images and an infectious insistence that will surely have record companies soon calling her up to write top line melodies for their artists." Paul Lester - THE GUARDIAN 'Lara Smiles shows massive promise' - Q RADIO ‘Pretty spot on if you ask me’ – BBC INTRODUCING 'Before Martin Hannett gets ambushed by Phil Spector...perfectly formed and infectious' AMAZING RADIO Lara Smiles is a singer, guitarist, songwriter and bedroom-producer.

Influenced by many genres of music Lara started out writing punk and soul tunes on her guitar – but all-night raves in her early teens led to a love of dance music and an obsession with sampling beats.

Lara is currently working on her debut album with legendary producer Youth (Primal Scream, Paul McCartney, The Orb) And she featured on a recent Orb track called 'The secret ways of bees'

Lara's double A side single was released in November 2015.

Smiles released her debut single 'Take It Back' in May 2013 and her second single 'A Million Times' released in August 2013.

'Take It Back' and 'A Million Times' are written by Lara Smiles, with production by acclaimed producer Tim Bran.
Tim Bran has produced material for the likes of London Grammer, Le Roux and Richard Ashcroft and he’s brought his innovating sound to Lara’s tracks.

Together they’ve created an electronic whirlpool of indie synth-pop over which Lara’s voice emanates effortless cool.

Lara featured on the single 'Promises' with pop-synth band, Strangers. Released in 2011 it’s been a popular hit with an ever-growing fan base, playing on radio stations around the globe and featuring on XFM’s play list for six months.